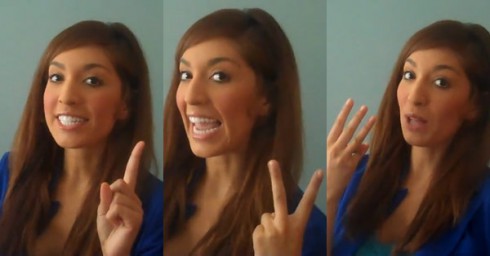 Teen Mom star Farrah Abraham’s book My Teenage Dream Ended is a New York Times best seller. Not one to rest on her laurels, the seemingly tireless reality star is already working on a follow-up. She announced this news via her video blog series recently. In addition Farrah chatted up her spin-off show and a new webisodes series to be called, Culinary Confessions.

Here’s the clip and if you can’t catch it or just want the highlights I’ll break it down for you after:

Farrah laid out some of her numerous future ambitions in a three-point presentation.

1. Farrah verified that a spin-off show is in the future. She said that, “I’m very hopeful that it will be with a great channel that everybody will grow with me and love.” I’m assuming that means it will not be with MTV. But you know what happens when we assume…

2. On the upcoming book Farrah stated in part:

“Everyone’s been loving My Teenage Dream Ended. Thank you for making it a New York Times best seller as that’s amazing and you know, I worked very hard on my literary, you know, growth and experiences to make that the best book that it could be. So many people have been like, “I read this book in one day. Is there more? Is there a spin-off to your book?’ I say yes! I’m so happy to let everyone know that I’m engaging in new literary efforts and I want to publish my fans.”

The way you can participate and possibly be published is to visit Farrah’s official site or email her @ fs.farrahabraham.me and ask her a question. She plans on getting back to those who submit questions as well as giving those selected to appear in the book a heads up.

Farrah also stated that we all can expect upcoming cookbooks and a children’s book as well.

3. On October 9th she’ll start broadcasting behind-the-scenes looks at her upcoming show in webisodes entitled, Culinary Confessions. A quick check shows that this name is already used so I hope Kim and Don from Phoenix don’t mind!

PHOTOS Farrah Abraham has her own emoji now