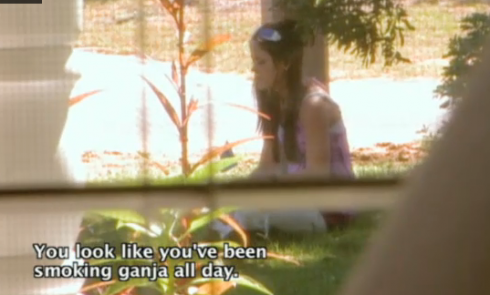 Jenelle Evans (who has admitted to smoking pot while pregnant, admitted to using pot on camera and was arrested for marijuana possession) and then-boyfriend Kieffer Depp were caught smoking up on her mother Barbara’s front porch on tonight’s episode of Teen Mom 2.

Barbara, who is often verbally abusive to Jenelle, has temporary custody of her Jenelle’s son Jace because of Jenelle’s drug use and negligent behavior.

Since her mom was granted custody, Jenelle enrolled in college at a local technical school, and has been trying to find housing with her unemployed boyfriend Kieffer Delp.

Spoilers from the Teen Mom reunion released to The New York Post reveal that Kieffer cheated on Jenelle the night before she left for L.A., and is pegged by Dr. Drew as a bad influence because he’s homeless, does drugs, and sold a story to a magazine about her while they were still together. Jenelle also asked to leave during the show to smoke, and admitted to smoking pot every day. She said she would go drive for an hour to smoke, and then come back.

The below scene opens with Kieffer saying to Jenelle: “You look like you’ve been smoking ganja all day.”

Jenelle’s mom then comes out holding Jace and exclaims “YOU’RE SMOKING WEED AT MY HOUSE!”

Kieffer starts cracking up, which prompts Barbara to yell “DON’T YOU LAUGH AT ME IN MY HOUSE, MR. DIRESPECTFUL!

“I DON’T THINK IT’S FUNNY, WEED GET CAUGHT IN THIS HOUSE, THE BABY’S GONE. GONE!

“YOU WON’T TAKE CARE OF YOUR BABY, AND NOW THIS! HIGH, HIGH. YOU’RE BOTH HIGH.

“THIS GUY, HE DON’T EVEN WORK. ALL HE DOES IS SIT AROUND.”

Kieffer: “What you mean? I get money.”

That’s kind of true, since she’ll probably be rolling in dough when her MTV check comes in. This domestic situation is always painful to watch because Barbara appears to be very harsh, but on the other hand Jenelle continues to make poor decisions, which most teen do, but being a mother ramps up the need for maturity and responsibility.