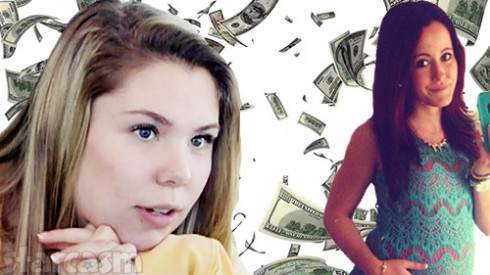 In the years since Teen Mom and Teen Mom 2 premiered, three-fourths of the cast has gone on to have additional pregnancies — leading to speculation that the 20-somethings had incentives beyond wanting to expand their families.

The latest round of rumors comes courtesy of All About the Tea, which references years old tweets about Jenelle Evans supposedly demanding $20,000 from the network. (At the time, Jenelle was reportedly expecting a baby with Courtland Rogers. That ended in miscarriage.) In one tweet, the mother of Jenelle’s ex-boyfriend Kieffer Delp claimed MTV was willing to pay Jenelle once they got proof she was indeed expecting. Another one of Jenelle’s exes, Gary Head, also said MTV offered Jenelle “like $20,000 to have another kid.”

All About the Tea went on to suggest it’s suspicious that only one participant from Teen Mom 3 has had an additional kid, implying that’s because the other cast members didn’t have the money offer on account of the show’s cancellation.

However, sources with more knowledge of the situation say the rumor is nothing but that: After 16 & Pregnant‘s Nikkole Paulun shared her own “story” about it, The Ashley’s Reality Roundup — who co-wrote a book all about Teen Mom — responded by saying it “isn’t true at all.” Teen Mom 2‘s Kailyn Lowry minced her words even less, saying, “that’s the biggest bulls**t lie I’ve ever read.”

For the record: Although $20,000 sounds like a decent sum, the average middle-class family will spend upwards of $12,000 just in the first year of a baby’s life, according to a 2010 report from the U.S. Department of Agriculture.