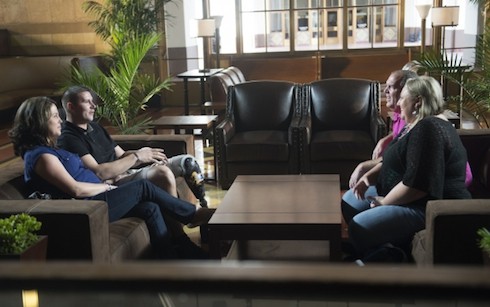 Last Wednesday, CBS debuted a brand-new reality series. Entitled The Briefcase, the show’s premise is quite simple. Every week, The Briefcase highlights the struggles of two families having a tough time making ends meet. The network gives each family a briefcase containing $101,000. They then let the two families mingle, get to know each other, and become familiar with the financial burdens that they’re both under.

Each family has 72 hours total to decide whether to give the $101,000 to the other, give some portion of it, or keep it all for themselves. The catch here is that each family also thinks it’s the only one with the briefcase. So it’s possible for Family A to keep its money and have Family B decide to donate B’s money to A, leaving A with $202,000 and the easing of incredible financial difficulty and B with nothing more than goodwill to pay its mounting bills.

CBS’ own description of the show is very brief, in part because it’s an emotionally complicated real-life take on game theory. The ratings are good–the May 27th premiere drew nearly seven million viewers, which is a solid summertime audience indeed–but the press the show’s been getting is perhaps more negative than the network would like. The main issue critics have with The Briefcase is that the drama comes from exploiting people who are already teetering on the edge of financial ruin; but, of course, without the threat of financial ruin, there wouldn’t be as much drama in the show.

It was…pretty hard to keep my breakfast down, watching this exercise in simultaneously ennobling and judging the financially distressed. It was like watching America’s twisted relationship with its own underclass, but with hokey dramatic music…..We get the horrible television we deserve, America. Is it too late for someone to greenlight “Bumfights: The Series”?

Reality Blurred‘s Andy Denhart points out that, since viewers are encouraged to choose sides based on narrow depictions of complicated problems, everyone who watches the show is guilty of (and victim to) the show’s overall “emotional manipulation”:

How fun, screwing with people’s financial futures! Why not just give each family the money and call it a day? Oh, right, there are no stakes then, no reason to care. Who would want to watch people in need getting money on television? But poor people deciding whether or not to be selfish and opening themselves up to viewers’ judgement? Yes, please! Get the popcorn!

And Raw Story’s Kali Halloway shares another important distinction: The families featured on the show signed up to participate not because they thought they might get a six-figure payday, but because the producers told them they were filming a documentary. Only after the families had agreed to be in a documentary did they find out what The Briefcase was really about:

The whole thing is, in a word, gross. We’re told via voiceover at the show’s outset that, “All across America, hard-working, middle-class families are feeling the impact of rising debt and shrinking paychecks.” That’s absolutely true, and CBS’s answer to that problem is apparently to exploit those families in ways that startle, even at this stage in the reality TV game. Make no mistake: The Briefcase is a good show to watch if you want to see a television network last valued at $30 billion ask families that are near to losing everything to battle over the very thing the network has in near endless supply: money.

Have you seen the show? What do you think of it? Do you intend to watch? Does the premise disgust you, or leave you intrigued? What do you, the viewers at home, think?