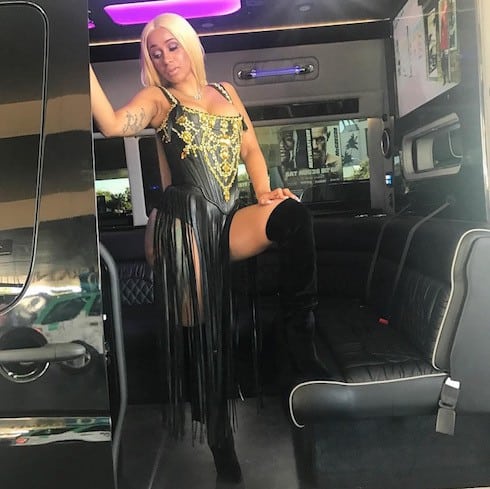 Rumors about Cardi B and Offset have run positively wild pretty much from the moment the two got together earlier this summer. Their hot and heavy ways first produced gossip that the two of them might be engaged–especially after Cardi was photographed both ring shopping and wearing what looked like a huge diamond engagement ring in the week leading up to the MTV VMAs. (Cardi’s response to those rumors was unusually coy: “Every woman wants to get married,” she said. “It’s never too early to get married.”)

Then, just like in the children’s playground taunt, talk of baby in a baby carriage quickly followed. We reported on Cardi B pregnant rumors just a few days ago, thanks to a report alleging that Cardi had been overheard talking to a stylist about the best way to hide a baby bump. While Cardi didn’t *look* like she was sporting a baby bump (as evidenced by this photo from Rihanna’s Diamond Ball just after the “Cardi B pregnant” rumors broke), fans pointed out that the conversation with the stylist, were it legit, could simply represent Cardi prepping for a future pregnancy.

But no one has ever accused Cardi of shying away from a hot topic. So it was entirely unsurprising when she rolled her eyes at the pregnancy story in a quick tweet yesterday:

These fake Cardi B pages need to chill ,I'm not knocked up-_-???

But the masterpiece came several hours later–earlier today, in fact–almost like Cardi had come up with the punchline for an unexpected joke:

Those pesky rumors will always come back, because that’s how gossip works when you’re a huge star. But they’re dead for now! And you’ll never hear Cardi rap about “bloody shoes” the same way again (and definitely not “bloody moves”) 😉