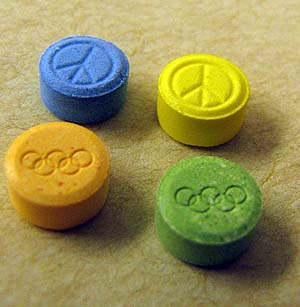 News reports about health are always hard to take too seriously because they take one bit of data published in a scientific report, and blow it out of proportion while ignoring all the other factors involved, especially if it puts a positive spin on something usually regarded as bad for us, or striking undue amounts of fear for the sake of sensationalism.

The latest headline in health science is that ecstasy could someday be used as a cancer treatment! This doesn’t mean that if you take enough street ecstasy you’ll cure whatever cancer you have, because the amount you would have to take to actually kill the cancer would kill you!

But a study published in New Drugs Journal shows that ecstasy (or MDMA) has been successful in killing cancer cells, especially myeloma, lymphoma and leukemia, in a lab setting. They are currently working on isolating the cancer-killing properties of the drug from the other toxic parts that could cause the person to die, and they are already making huge progress. They’ve found that the more they separate the cancer fighting part of the drug, the more effective it is (of course, this might mean that the euphoric property of the drug may be filtered out during this process, but that’s yet to be seen.)

“We were looking at structures of compounds that were more effective. They started to look more lipophilic, that is, they were attracted to the lipids that make up cell walls. This would make them more ‘soapy’ so they would end up getting into the cancer cells more easily and possibly even start dissolving them.

By knowing this we can theoretically make even more potent analogues of MDMA and eventually reach a point where we will have in our drug cabinet the most potent form we could.”

“While we would not wish to give people false hope, the results of this research hold the potential for improvement in treatments in years to come.”