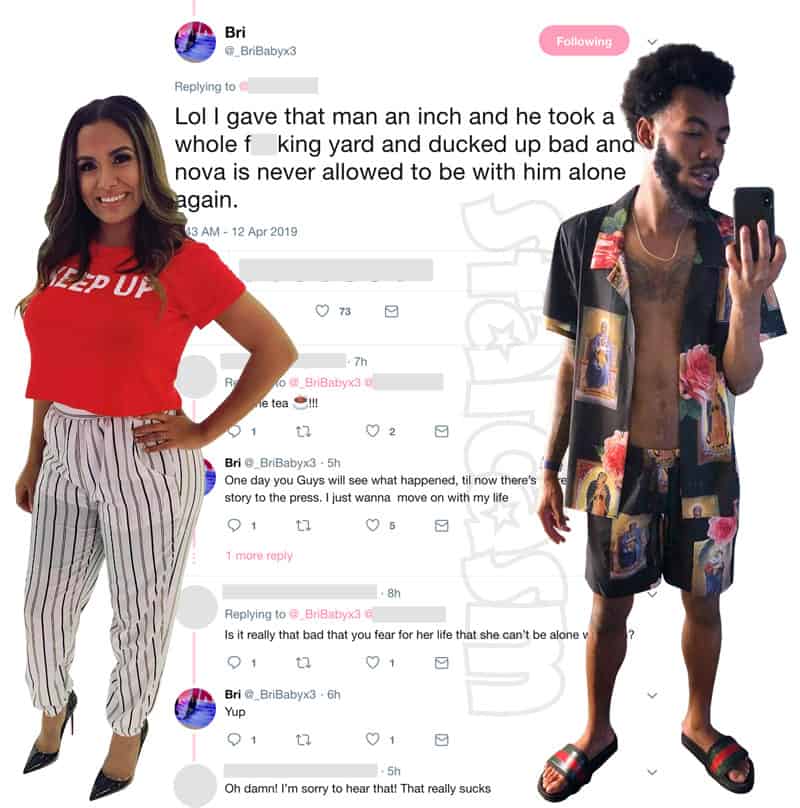 On the current season of Teen Mom 2, Briana DeJesus’ ex Devoin Austin is really stepping up as a father to their daughter Nova. Briana is so impressed by Devoin’s commitment that she even invites him along for the DeJesus family’s trip to Puerto Rico, even though Briana is dating someone else.

But, it seems that Devoin has managed to go right back to square one after Briana says he “f**ked up big time.”

Briana first revealed that Devoin had lost her trust in a series of tweets last week. Here’s how the conversation went:

BRIANA: I’m at a point where I just wanna drop both my kids off at their dads for the rest of the week but I know I’ll feel so f**king sh*tty for doing it and I wish that wasn’t the case. (Not bc I don’t wanna be around them, but to teach these men what parenting is really like) 😰

TWEET: I think Nova’s Dad could do it for sure…Not so much [Stella’s] dad…He is a poor excuse for a dad…I think Devoin could handle both

BRIANA: No he couldn’t. He f**ked up big time and I’ll never trust him again

The topic of Devoin came up again earlier today, and Briana further expressed her frustration over the recent incident. “Lol I gave that man an inch and he took a whole f**king yard and ducked up bad and Nova is never allowed to be with him alone again,” she tweeted.

Another Twitter user questioned whether or not the situation was as serious as Briana was making it sound. “Is it really that bad that you fear for her life that she can’t be alone with him?” she asked. “Yup,” Briana replied.

As you might imagine, some of Briana’s Twitter followers were asking her to share more information about what happened, but she declined. “One day you guys will see what happened, til now there’s no reason to sell this story to the press,” Briana wrote. “I just wanna move on with my life.”

When Briana mentioned that we will see what happened “one day,” she may have been referring to the day that the Teen Mom 2 Reunion airs. A reddit user who was in attendance at the taping in New York City over the weekend revealed earlier this week that Briana’s segment was in part about her being upset with Devoin. “Bri is p*ssed at Devoin right now because of something that happened last week, but Devoin owned up to it and the crowd loved him,” u/mariasangria87 spilled.

The Reunion attendee didn’t provide any further details at the time, but that changed after Briana brought up her issue with Devoin again today. “He got really drunk on one of Nova’s visits, which was supposed to be an overnight,” she dished. “They were at a pool while he was drunk and apparently Nova can’t swim. Bri picked Nova up – nothing happened to her, but now Bri isn’t comfortable with Nova going there alone.”

Numerous commenters responded wanting to know more. “He was [definitely] apologetic, but Bri did not wanna hear it,” the redditor further revealed. “She said she needs time to get over it.”

I must admit, I was wondering what in the world Devoin could have done to merit a response like that from Briana. Having some drinks while at a pool with Nova DEFINITELY fits the bill! Especially if Nova can’t swim!

UPDATE #TeenMom2 @_BriBabyx3 confirms she's mad at ex Devoin because he got drunk while watching their daughter Nova alone at a swimming pool, and the two go back and forth on Twitter about whether or not it was a big deal. (That's me putting it nicely.) https://t.co/yt3T92UjGZ

It’s unclear exactly when the alleged pool incident took place, but on the Monday before the Reunion weekend in New York City, Briana shared a tweet that seems like it could have been related. “Woke up this morning and I’m still p*ssed,” she wrote. “I hate when people take advantage and are not responsible like wtf.” The timeline certainly lines up with what the Reunion witness said about the incident being “last week.”

On a side note, Dr. Drew reportedly hit up Devoin about what the correct pronunciation of his name is, and he said it was not De-vahn but De-voin, just like it’s spelled. (i.e. rhymes with the coin)