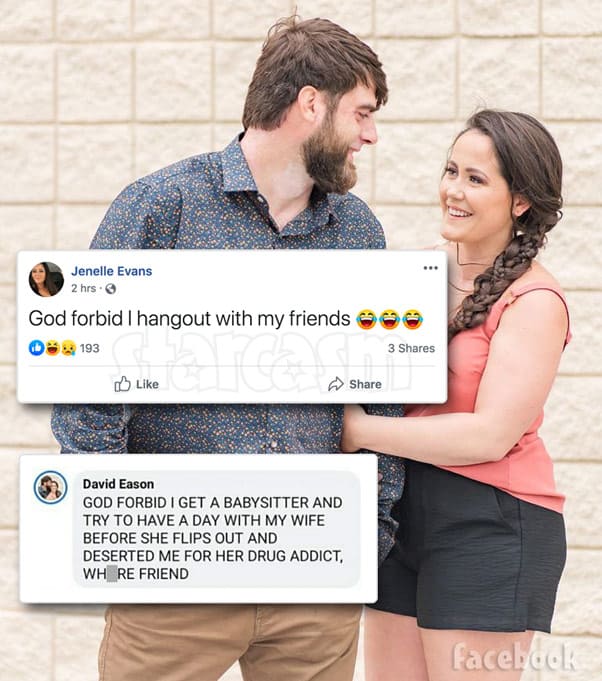 “Does anyone else not have one single person to babysit and always do absolutley [sic] everything with your kids?” David asked back on May 14. “#TrueStory 😫” Jenelle replied in the comments.

Earlier today, followers of the contentious couple first got a hint that things were once again not well on The Land from Jenelle on Facebook. “God forbid I hangout with my friends,” Jenelle wrote, along with a string of three laughing emoji.

David responded with his trademark positivity and maturity as he enlisted the support of Caps Lock to assure his wife that he fully supported her freedom to socialize with others. “GOD FORBID I GET A BABYSITTER AND TRY TO HAVE A DAY WITH MY WIFE BEFORE SHE FLIPS OUT AND DESERTED ME FOR HER DRUG ADDICT, WH*RE FRIEND,” he wrote.

The endearing message softened Jenelle’s heart as she openly reflected on some of her soulmate’s most admirable traits. “At least my friend can pay for her own bills… uhm.. whens the last time you paid for ANYTHING?” Jenelle asked. “History repeats itself,” she added, along with an lol.

The heartfelt public communication between the two spouses inspired David to once again take a long, hard look at himself in the mirror before admitting to one of his few faults. “My biggest flaw, I might talk sh*t but never get even,” David reveals. “I can’t scoop to your level,” he added.

Some of David’s detractors were quick to point out that the phrase is supposed to be “stoop to your level.” It’s unclear if the word choice was just a stupid (or scupid as David might say) mistake, or if David intentionally got it completely wrong as part of a very elevated play on words that most of us cannot understand. Perhaps it even doubles as a tribute to David’s covfefe-creating hero Donald Trump?

If you’re curious who Jenelle’s “DRUG ADDICT, WH*RE FRIEND” is, the answer appears to be her on-again, off-again BFF Tori Rhyne. After Jenelle and David’s exchanges, Tori shared someone else’s post on Facebook that reads: “3rd wheeling with toxic couples be lit asf.” Tori tagged Jenelle and added this string of emoji: “👏🏼😅😅🔥”

UPDATE – Tori seemed to confirm her identity as Jenelle’s DAWF with a couple photos and a caption on Instagram: 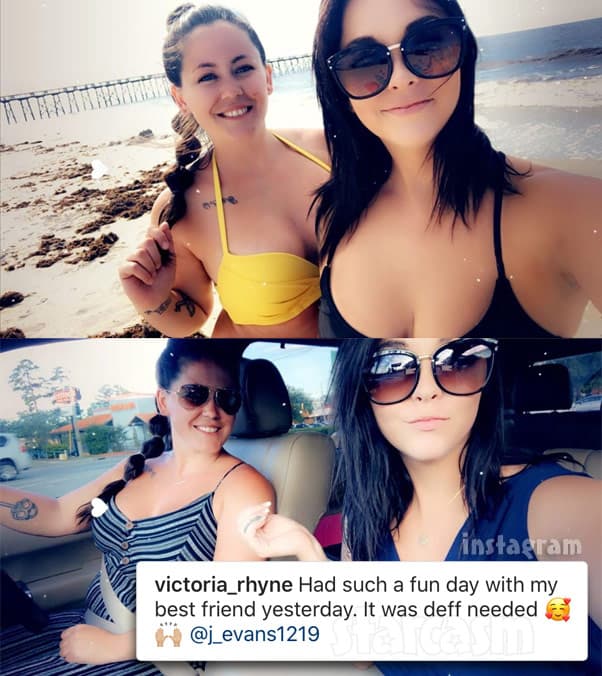 Just prior to the Facebook skirmish with David, Jenelle mentioned her pending boat excursion while offering up her insights on the protests supporting justice and racial equality currently taking place all over the globe in the wake of the death of George Floyd (and numerous others) due to police brutality. “Well while all of you are rioting and destroying your precious cities, I’ll be far far away on my boat away from all of you 🤷🏻‍♀️.”

Jenelle got into a discussion on the topic in the comments with 16 and Pregnant Season 1 star Whitney Purvis:

WHITNEY: [Shares a Napoleon Dynamite gif in which he says “Lucky.”]

JENELLE: Whitney other than that I’m at home in the country… far away from any cities 👍🏼 It’s a scary time right now, especially for our kids 😢

WHITNEY: Yeah it is so bad around here! We have a 9 o clock curfew and I watched a video of little girl get pepper sprayed!! Who would bring their child to a riot? It is scary and I’m about to go on vacay and take a break from this. You’re out of Nashville now right? I heard it is pretty rough there too 😥

JENELLE: Yeah I’m not in Nashville anymore and back in NC. I’m glad I’m back in the country and away from people. This world is getting sadder and sadder each day. And yeah I saw that about the child getting sprayed.. why would you bring your child to that?!!! I’m doing everything in my power to stay far away.. not exposed them to this.

JENELLE: BUT I WILL educate my children what is happening from a far and that racism is wrong in all forms… there’s no need to put your child’s life in danger tho.

WHITNEY: That’s right, I agree with you there. Best thing to do is just educate. My parents didn’t really talk to me about race. I wanted the city life so bad and now I want to get a house in the country again lol. Be safe on the boat!

That’s classic Jenelle for you: always making sure that she isn’t putting her children in dangerous situations.

Jenelle's road rage scene on #TeenMom2 was SUPER INTENSE, but everyone is talking about the scene after the confrontation in which Jenelle is pulled over by a state trooper and Jace is left alone in the SUV with a gun in plain view: https://t.co/rNlQugOk4B

#TeenMom2 Listen to Jenelle's 911 call from December in which she says David Eason was armed, in a rage, and trying to smash in the front door. Jenelle called from the attic, but left daughter Ensley asleep in her room. Includes full audio and transcript! https://t.co/nPjmRIryjD pic.twitter.com/tCQjhne0Fd

Given all that transpired between Jenelle and David today, I decided to see what the Vegas odds experts were saying about what to expect next. It appears that the chances of huge fight this evening that includes a 911 call are currently at 2:1 odds. That is the second most likely scenario. Jenelle soon tweeting that everything is fine and lashing out at people for assuming her and David’s posts were about each other is currently at 1:1 odds with no payout.

We will certainly monitor the situation, adding The Land to a long list of locations that may experience rioting, fires, and looting in the next 24 hours.

NOTE: This article was extremely sarcastic. Reporting on Jenelle and David constantly fighting and making up for years can get really old really quick.