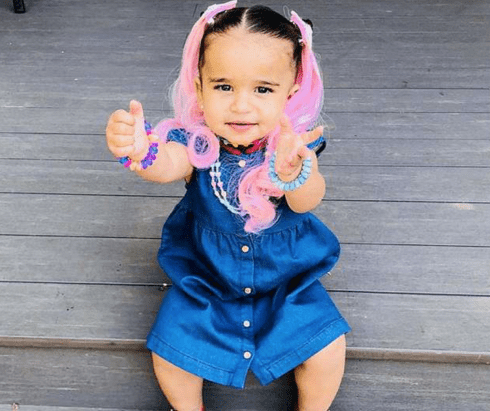 Blac Chyna took to Instagram to share a cute photo of her one-year-old daughter Dream sporting a pair of pink hair clips. But Blac’s post met with such a wave of criticism that she took the photo down. Blac has previously sported pink hair — which it turns out is one reason why many had a problem with Dream’s hair clips.

“My beautiful baby girl,” Blac captioned the photo, which also depicts Dream wearing a bunch of bright and colorful jewelry. All in all, the photo Blac shared really just looks like a bit of dress-up fun. But the backlash was swift.

Commenters claimed that the clips were basically weaves, lamented that Dream would “turn out” like Black Chyna, and pondered what Dream’s grandmother Kris Jenner would think of the photo:

Just a few days ago, Dream’s dad Rob Kardashian shared some super-adorable snaps of his baby girl dressing up for a play tea party:

In Rob’s pics, the happy toddler sports two different hairstyles and pink outfits, even though the photos were taken within minutes of each other. There are no “hair extension” clips in sight, but it’s obvious that the tyke simply adores the color pink.

Then a little bit later another tea party. Lol im dying how My baby looks like two completely different girls in a matter of minutes. Lol LOVE U DREAM pic.twitter.com/kLkr1YLUeD

Along with 17-month-old Dream, Chyna has a five-and-a-half-year-old son named King Cairo from her previous relationship with Tyga, who you may remember dated Dream’s aunt Kylie Jenner for three years.

What do you think? Did Blac Chyna overstep Dream’s boundaries with the hair clips, or was she just having a bit of fun?