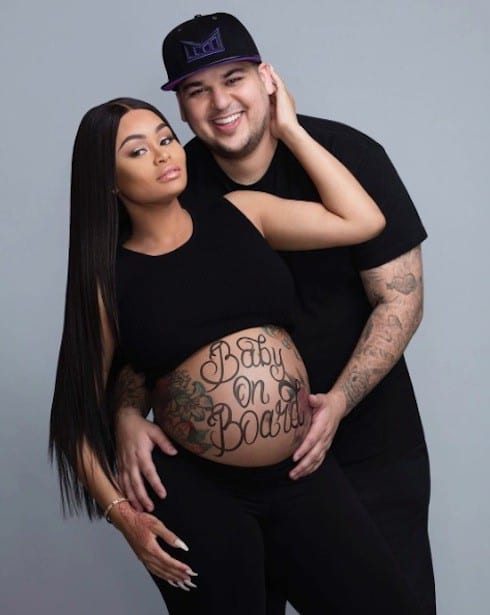 Are Rob and Chyna done? Just hours after announcing the gender of their first baby together, new rumors–and an accompanying video clip–have fans of the couple wondering whether their time together is nearing its end. The newest Kardashian couple appeared to be full of good celebratory vibes this weekend, thanks to the premiere of Rob and Chyna, their very own reality show on Kardashian home network E!. Just last night, during the debut episode, Rob spilled the tea about the child he and Blac are expecting; the couple then shared the good news via Instagram:

Blac, who reportedly changed her name to Angela Kardashian for entertainment purposes, is due in early November, and is in good health. But she was not pleased with Rob getting ahead of her on this one: I’m so confused,” she said, on the show. “Rob and I agreed that we were going to wait and do a cool surprise with the gender reveal, but Rob told his mom. I guess that is just the Kardashian family: talk, talk, talk, talk.”

And it appears that the drama didn’t end with that miscommunication. The supertrailer for Rob and Chyna‘s upcoming season makes clear that the show will revisit the possiiblity of a split–at one point, Blac tells a friend “I don’t even know if I want to stay with Rob,” and further says–at least half-jokingly, judging by her tone–”Part of me wants to take a paternity test.”

And at least one set of (completely unconfirmed) rumors suggests that, while Rob is happy that his fiancé and her unborn child are both healthy, he’s also disappointed that he won’t be welcoming a son into the world.

(Photo credits: Are Rob and Chyna done via E!)

THE OTHER WAY Deavan and Jihoon wedding photo leaks