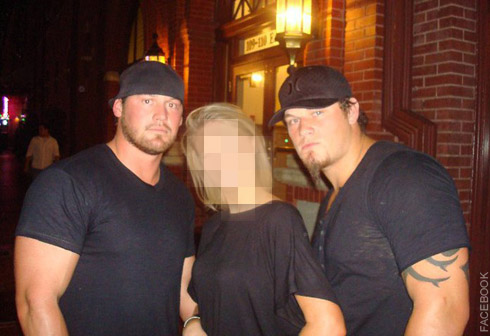 In Texas you don’t get a nickname like “The Beast” easily and apparently part of 24-year-old Lane Elenburg’s tough-guy nickname resume is participating in a 2008 beating of Texas State linebacker Brian Quackenbush!

After researching several sources online I’ve pieced together a summary of what happened:

Lane’s younger brother Gunter Elenburg was a back-up punter for the Texas State Bobcats in 2007 and got into an argument with teammate Brian Quackenbush while on Sixth Street in Austin on the night of January 11, 2008. According to police reports the argument was over a woman and it continued through text messaging as the two parties left in separate vehicles. 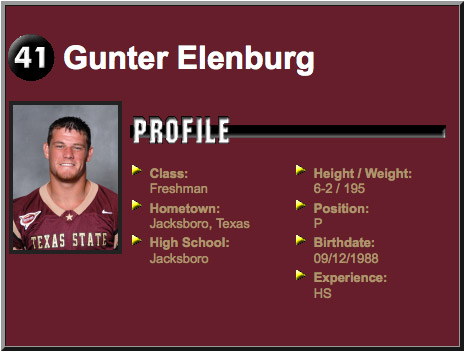 Quackenbush returned to his home in San Marcos and Lane Elenburg and Gunter Elenburg forced their way into his home and beat him severely. From The University Star via U-Wire:

Quackenbush was alone when he tried to lock the door to his house, but Gunter and Lane, a Texas Tech football player from 2005 to 2006, allegedly pushed their way in and started assaulting him, according to police reports. Gunter allegedly punched Quackenbush with a closed fist, while Lane pushed him down onto the television, police reports said.

From there, police reports state, “Gunter was on top of him using his hands to strangle him.”

The two brothers fled the scene in a black SUV when Quackenbush’s friends arrived, according to police reports. Quackenbush never lost consciousness, but suffered facial fractures and needed10 stitches to close a gash over his left eye.

From the San Marcos Record:

“The victim got home and got a text message from the alleged suspect saying he was going to come over and take care of him, beat him up or whatever,” [Police Detective Byron] Mobley said. “That individual and his brother came over, forced their way in and assaulted the guy.”

Detective Mobley had the best quote about the incident in response to questions as the whether or not alcohol was involved. From CBS Sports:

“I couldn’t positively say that, and the report doesn’t say that,” Mobley said. “But they were on Sixth Street and it happened at 4 in the morning. I don’t think they were having a ham sandwich.”

The last report on the investigation stated that it had been forwarded to Hays County District Attorney Sherri Tibbe and her office would be determining whether or not the incident was a prosecutable assault or just a drunken fight.

Since there is nothing else about the case nor any criminal record of Gunter or Lane (that I could find online) I assume the pummeling was eventually officially classified as a “drunken fight.”

If anyone out there knows anything more about the incident feel free to drop us a line! I’ll be curious to find out exactly what was said by whom leading up to the fight! My guess is that it was another testosteronized example of chivalry on the streets of Austin – the only question is which one stepped on a woman’s “honor” and which one was defending it!

Here are the gridiron specs on Gunter Elenburg from the Texas State Bobcats website:

Jacksboro HS Versatile athlete who excels in football, basketball and track … twice named the Class 2A state punter … in addition to earning All-District 9-2A honors three times, three-time all-district defensive back and two-times as a receiver … had a 42.3 yard punting average, registered 163 tackles and had over 900 receiving yards … was a multiple Class 2A Region II Track champion in the high jump.

Is your attraction to the Big Brother house drama bordering on unhealthy? Then you need to check out BecauseYoureAddicted.com for (almost) around-the-clock coverage of the Big Brother 12 live feed including quotes, photos, synopses and commentary! It’s one dedicated fan watching the feed 15 hours a day so you don’t have to!