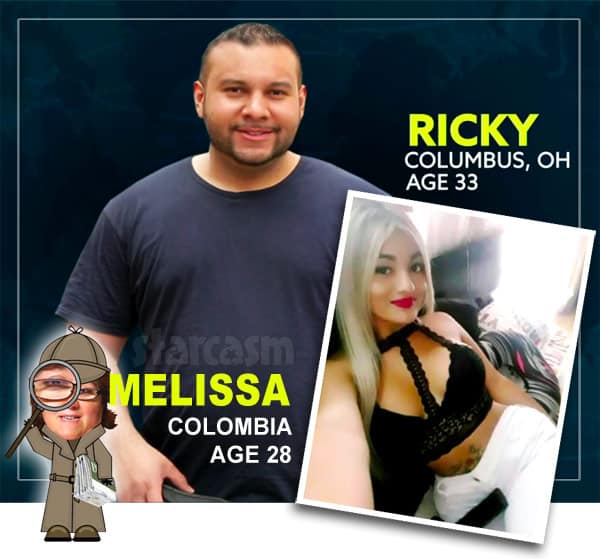 One the Season 2 premiere of Before the 90 Days, fans got to meet Ricardo “Ricky” Reyes, a 33-year-old soon-to-be single father of two girls who raised the eyebrows of friends and viewers with his too-good-to-be-true online mystery woman, 28-year-old Colombian hottie nurse Melissa. TLC has been teasing Ricky’s story line by openly asking in their promos whether or not he is being catfished, so the question of whether or not Melissa is real — or at least different than she/he has portrayed to Ricky — has been a hot topic on fan forums and social media ever since the preview trailer was released last month.

We still don’t have a definitive answer on that question, but we do have some new “evuhdense” that seems to suggest that Ricky is going to meet a woman on his trip to Colombia — just not Melissa.

EXHIBIT ONE: I tracked down a photo of the TLC film crew shooting Ricky in Medellín, Antioquia, and it appears as though he is having frozen yogurt (or something similar) with a woman that looks a little different than Melissa from the photos: 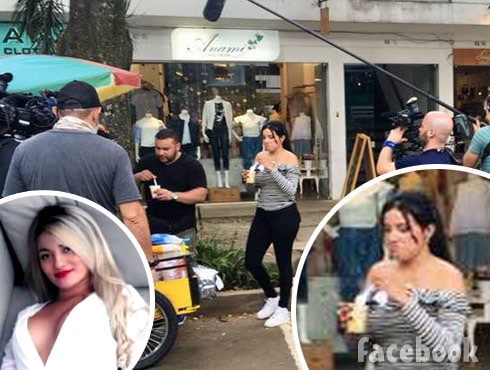 This isn’t proof of anything by any means, and that could actually be the same woman — just without the platinum blonde hair and makeup. I don’t think it’s the same woman, but I will certainly concede that it is possible given the poor resolution of the image.

EXHIBIT TWO: I was able to get my hands on the episode synopses for the first six episodes, and there are some MAJOR SPOILERS! It mentions that Ricky is looking to move on after being stood up in episode 5, and the sixth episode description mentions that Ricky is keeping some information from Ximena. Wait, what? Ximena?! Could it be that Ricky took the lemons from Melissa and made himself a nice glass of lemonade by getting a date with another woman — perhaps the woman in the photo above? Once again, not exactly proof of anything, and there are a lot of blanks to fill in.

It is nice to see that even if Ricky was being catfished by Melissa, there is the potential for at least a moderately happy ending to his trip to Coloombia — which is great, because Ricky seems like a pretty nice guy and a great dad, and I really don’t want to see his story break bad.

Unfortunately, this 90 Daytective let you all down because I was unable to uncover a smoking gun with a more definitive conclusion. As a result, in order to find out what happens with Ricky and Melissa, we’ll all just have to tune in to new episodes of 90 Day Fiance: Before the 90 Days airing Sunday nights at 8/7 on TLC!

UPDATE – If you did tune in to the August 19 episode, then you know that TLC was playing all of us and Melissa wasn’t a catfish at all! Oh man, I love this show so much!

Oh, and if you’re looking for additional spoilers on the cast, as well as TONS of background info, here are some links:

Angela was on Maury twice after appearing on Trisha

Jon and Rachel got married in England in May!

Angela has a mug shot and history of relationship drama

Everything we know about Ricky from Columbus, Ohio and his potential Colombian catfish girlfriend Melissa (Before this post, obviously)