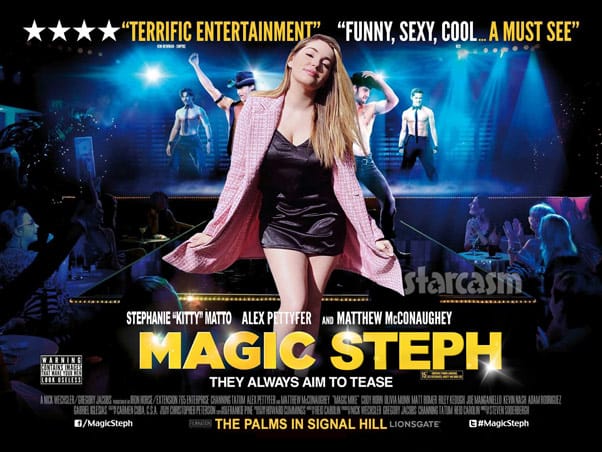 90 Day Fiance: Before the 90 Days star Stephanie Matto surprised some of her newfound fans this week when she talked about the time she spent living in Los Angeles pursuing an acting career. After months of unsuccessfully looking for her big break, the combination of loneliness, alcohol, and being broke motivated Stephanie to try out a new career path — as a stripper!

“Wishin’ I was back in LA,” Stephanie began an Instagram post on Wednesday. “There was a time when the thought of returning, even if for a quick visit, pained me. Why? When I was 24 years old I saved 10 grand, packed my bags, and moved to Los Angeles with hopes of becoming an actress.”

Unlike a lot of Hollywood dream-chasing stories, Stephanie’s starts off relatively well. She had a nice little nest egg, a relatively successful YouTube channel, and a resume that included being a finalist on a national Nickelodeon talent competition (more on that soon). But, even Hollywood journeys that begin on relatively sure footing are risky.

“6 months later I was working as a stripper at a gentlemen’s club called The Palms in Signal Hill,” Stephanie continues, adding the ? and ?‍♀️ emoji. “Ahh so goes the story of so many aspiring actresses!”

Stephanie says that her experience as a stripper was anything but pleasant, but she managed to remain positive and continued moving forward. “That job forever scarred me in ways that still trickle into my personal life today, BUT I will never regret my move. I ultimately hit rock bottom while living in LA, and through that painful experience sought healing by investing time into my first book. I took lemons and made something closely resembling lemonade.”

I assume that Stephanie is referencing her book Mean Boys & Memories: A Compilation of My Most Outrageous, Hideous, and Embarrassing Stories, which was published in 2015 and is currently available on Amazon.

“I have always been a risk taker,” Stephanie continues. “I have always lived life on the edge, and although my illness has slowed me down the past few years, I still like to think there is that crazy spontaneity left in me ?.” She concludes by asking her followers: “What is the absolutely wildest, craziest thing you ever did in your life?” (Many of her followers had some AMAZING stories that they shared in the comments, and Stephanie was really appreciative and encouraging with her responses.)

Wishin’ I was back in LA. There was a time when the thought of returning, even if for a quick visit, pained me. Why? When I was 24 years old I saved 10 grand, packed my bags, and moved to Los Angeles with hopes of becoming an actress. 6 months later I was working as a stripper at a gentlemen’s club called The Palms in Signal Hill ??‍♀️ Ahh so goes the story of so many aspiring actresses! That job forever scarred me in ways that still trickle into my personal life today, BUT I will never regret my move. I ultimately hit rock bottom while living in LA, and through that painful experience sought healing by investing time into my first book. I took lemons and made something closely resembling lemonade. I have always been a risk taker. I have always lived life on the edge, and although my illness has slowed me down the past few years, I still like to think there is that crazy spontaneity left in me ? What is the absolutely wildest, craziest thing you ever did in your life?

Speaking of Stephanie responding in the comments section, she shared a little more information about her time as a stripper when someone commented about the inevitable negativity that was headed her way because of the post. “I am pretty open about my past with exotic dancing. I think for many women it can be liberating and great income, but unfortunately its incredibly toxic in some cases too.”

She isn’t kidding about being open about her stripping experience. Stephanie has numerous videos on her YouTube channel about it. In a video titled “Becoming a Stripper and Moving to Los Angeles with My CRAZY Ex” (included below), Stephanie reveals that she moved to Los Angeles with a guy that she had been dating for four years.

As the title suggests, Stephanie and her boyfriend broke up. She mentions in the video that being in Los Angeles where nobody knew her made the decision to try stripping easier for two reasons. Number one, she didn’t have any real support system. She says all of her friends were just as messed up as she was, and there wasn’t much in the way of sage advice when it came to making life decisions.

Not knowing anyone also meant that Stephanie could try out exotic dancing with very little risk of her family finding out.

In addition to those factors, there was booze. Lots of booze. “People always look at me and they’re, like, ‘I can’t imagine you being a stripper.’ And honestly, I can’t either,” Stephanie says. “I don’t know how I did it. I was in a very big alcohol-induced haze during that time. I just made a lot of questionable decisions, and that was one of them.”

Stephanie talks at length about all of the contributing factors, including being alone and drunk, but she eventually cuts herself off. “And I was broke,” she admits and laughs, before humbly confessing that was the major reason.

In another video titled “I Dated ANOTHER Married Man | Crazy Stripper Story!” Stephanie reveals that her stage name was Kitty. “The reason I came up with the stripper name Kitty is because when I first came in to apply for the job and to audition, I was wearing a Hello Kitty bracelet, and when they were asking me, like, ‘What’s your dancer name gonna be?’ I looked down at my bracelet I was, like, Kitty.”

We crack open the #evuhdense binder on #90DayFiance #BeforeThe90Days' Stephanie (a YouTuber with 350k subs) to find out more about her life-threatening illness & whether or not her relationship with Erika is real or just a stunt to get on the show. ??️‍♀️ https://t.co/xV4LMb3Co3

Stephanie shares a lot about the other dancers she worked with, as well as some of her experiences with the male clientele. But, she insists that she kept things rated R.

“I didn’t do any sketchy stuff when I was a stripper,” Stephanie insists. “It’s not like I was ****ing some **** in the back. It’s not like I was doing anything inappropriate. Honestly, most of the time I would be the stripper that would just go and sit with a bunch of dudes and talk about Game of Thrones.”

I scrolled through Stephanie’s Instagram profile to see how far back it goes, and discovered that it dates all the way back to 2012! Here is a photo of Stephanie from when she was living in Los Angeles, not long before she moved back to the east coast:

Chillin in my jammies??

On Before the 90 Days, a major part of Stephanie’s story line is her reluctance to come out to her parents as bisexual. (That aspect of her story line has been called into question by some viewers thanks to a video posted by Stephanie back in 2016 titled “I Was in Love With a Girl | My First Bisexual Experience.” Stephanie has since addressed that “controversy” at length.) As you may have guessed given Stephanie’s propensity for exploring new things, her bisexuality was not the first secret she has kept from her parents.

Stephanie revealed in a YouTube video posted in February of 2017 that her mother was completely unaware that she was a stripper during her time in California. “Up until a couple weeks ago, my mother never knew that I was a dancer,” Stephanie says in her “Stripper Confession” video. “And so that is why I kind of tiptoed around it on my YouTube channel, because I didn’t want to break her little heart.”

Once again, alcohol played a big part in Stephanie’s decision-making process. “In a state of drunkenness I actually told her, and she reacted pretty well to it,” Stephanie says. “She was very sad about it, but we talked it through and I feel really great because it feels like a huge weight has been lifted off of my shoulders.”

More from Stephanie reflecting on the experience of stripping and revealing it to her mother:

She is kind of the last remaining person that didn’t know about it, and I used to be ashamed of it for a very, very long time. But, we all have difficult and weird pasts, and these past sometimes shape us into the people that we are today. Looking back, I’m really glad that I was a dancer because it has helped change my outlook on the world and on life, and it has desensitized me a little bit.

But, I also think that’s a good thing because I used to be way too sensitive back in the day. So, I don’t know, you guys might think differently, but these are just going to be some of my stripper confessions.

Stephanie has since found a much less toxic way of embracing her sexuality in a liberating way. She currently has a Patreon account with multiple subscription levels, most all of which include varying degrees of adult content in the form of nude photos and short videos of Stephanie. Stephanie recently exercised her talents as a writer to defend her choice to offer nude photos online — you can read her statements here or click the link in the tweet below:

#90DayFiance #BeforeThe90Days 29-yr-old YouTuber @StepankaMatto makes her debut Sunday & she took to Instagram to get ahead of some inevitable criticism once viewers discover that she offers nude photos & videos to paid subscribers on her Patreon account. https://t.co/ekus5qaQj4 pic.twitter.com/bq8uCntqew

To continue following along with Stephanie and Erika’s love story, be sure to tune in for new episodes of 90 Day Fiance: Before the 90 Days airing Sunday nights at 8/7c on TLC. Who knows? Perhaps Erika will take Stephanie to an Outback strip club where Stephanie will surprise her by jumping up on stage and resurrecting Kitty? (I don’t know if Australians refer to strippers as Barbies on the barbie, but they should!)

And for those of you curious to hear more about the life of Kitty straight from Stephanie herself, here are a few videos that I found on her YouTube channel: