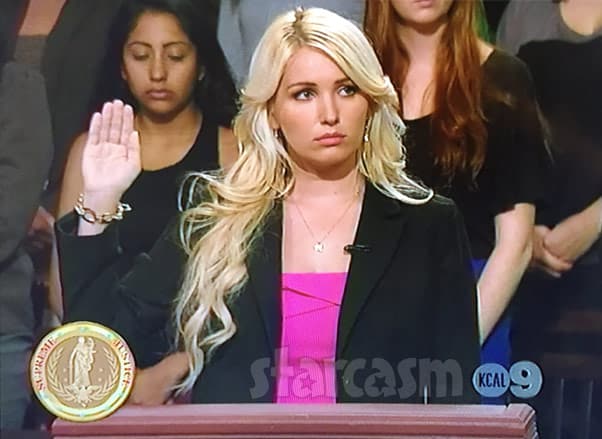 29-year-old Stephanie Matto is currently starring on 90 Day Fiance: Before the 90 Days as one half of the popular franchise’s first ever same-sex couple. But, being a reality star is not the first time Stephanie has been in the national spotlight. Believe it or not, she has been hustling in the entertainment industry for at least 16 years, dating all the way back to her appearance on Nickelodeon at the age of 13.

Nickelodeon’s comedy skit series All That (which included famous cast members like Kenan Thompson, Nick Cannon, Amanda Bynes and Jamie Lynn Spears) launched a nation-wide contest looking for talented and funny young performers in early 2013. Stephanie was 13 years old at the time, and she submitted a video of herself as a senile, sausage-obsessed foreigner by the name of Quishva that was recorded in her basement.

In her skit, Stephanie reportedly played a cynical grief counselor named Mrs. Bloaf. I spent WAY too much time trying to track down a clip of the skit online, but I had absolutely no luck.

Stephanie would end up not winning the competition as Christina Kirkman took home the grand prize of being an official All That Season 9 cast member. A young man named Colton Gosselin was the runner up, but it was finalist Ryan Coleman that would eventually join Christina as part of the All That cast after Jamie Lynn Spears left to star on Zoey 101.

Five years later, Stephanie would reflect on her All That experience in “My College Essay,” which she posted on writing.com. Here’s an excerpt about her time in front of the Nickelodeon cameras:

Aside from the absurdity of playing a madwoman, I fondly remember playing Mrs. Bloaf, a cynical grief counselor. Playing Mrs. Bloaf not only required me to release a vicious “nut” monkey on a helpless 7th grader, but to work in front of a green screen . There I stood, my 13-year-old jittery self, in front of that neon canvas, my neck being weighed down by the enormity of the beehive sitting atop my head. The lights were directly on me, and I could count about three cameras pointing in my direction. If I mess up, will they release the “nut” monkey on me? I know this thought was preposterous, but I couldn’t help but remind myself that I was a girl who was only familiar with small school productions, and was now being thrown into the midst of actors who really knew what they were doing.

Grasping for some positivity in the nerve-racking situation, I reassured myself that out of 10,000 kids, I was the one chosen to be here. It was then that I began to close my mind off from any doubts and fears. I was no longer on the set of “All That“, but back in the comfort of my secret lair. I belt out a boisterous laugh, give an evil grin, and dance around the green screen (as Mrs. Bloaf would have naturally done), and when it’s all over, I feel elated. I realize, that no matter where I perform, in my basement or on a Hollywood set, I am capable of anything.

Unfortunately for Stephanie, her taste of Hollywood success ignited a hunger that would remain unfed for some time. Monagiza did a profile on Stephanie after her story about being diagnosed with the rare bone marrow disorder aplastic anemia garnered international attention, and they state the following about Stephanie’s career ambitions just after All That:

As a young adult, she tried to make it in the world of acting, and would constantly travel between New York and LA to score movie or TV roles…Sadly, Stephanie’s acting career didn’t really work out, and she only bagged herself one acting role in 2009. Despite her path to stardom crumbling at her feet, Stephanie was determined to make a name for herself and show the world what she was made of. So, in 2012, she created her “Stepanka” YouTube page, and she has since racked up more than 55 million views on her videos.

In addition to the movie role, Stephanie also landed a role on Supreme Justice With Judge Karen Mills. And I say “role” because apparently Stephanie was given a script to act out — and the script was GOLDEN! Stephanie played a young woman named Clarissa Vaughn, who was in court due to a pair of underwear that her boyfriend allegedly made her wear. Those “granny panties” allegedly gave Clarissa a rash, and they would inspire the name of the episode. Clarissa was suing him for $1,032 in personal damage.

I may have searched longer for video of the “Granny Panties” episode than I did for Stephanie’s All That appearance, and this time I had a little bit of luck in the form of two very brief clips! Here is Judge Karen grilling Clarissa about the situation, and then a video after the verdict was read. Clarissa confronts her ex-boyfriend outside the courtroom and delivers her titular line with aplomb: “You’re so full of it! Your granny panties ruined my life!”

In addition to the two clips, I was able to track down an old tweet from Stephanie about her appearance. “I did that show a while back!” She tweeted in June of 2015. “They changed my name to Clarissa and made up a story about granny panties ???”

It seems that at least one viewer in Lewiston, Maine was not too pleased with the mature topics discussed on the episode! Check out this screen cap of her Facebook post after a rerun airing:

If you know where I can find more video from this Supreme Justice With Judge Karen Mills episode, please hit me up at the contact info below! The same goes for Stephanie’s appearance on All That!

UPDATE – It turns out that Stephanie herself uploaded the entire episode on YouTube back in 2015! Here’s the video:

Meanwhile, you can continue to follow along with Stephanie and Erika’s granny panties-less adventures Down Under with new episodes of 90 Day Fiance: Before the 90 Days airing Sunday nights at 8/7c on TLC.

#DidYouKnow #BeforeThe90Days' @StepankaMatto was a stripper in LA named Kitty!? ? (Yes, she kept that a secret from her mom too.) Find out all about Stephanie's brief stripping career, including how she chose the name Kitty. #90DayFiance #MagicSteph |?? https://t.co/EaCN3fZlRQ pic.twitter.com/5unxeSGYLQ

Before the 90 Days Season 3 cast photos, bios and preview trailer