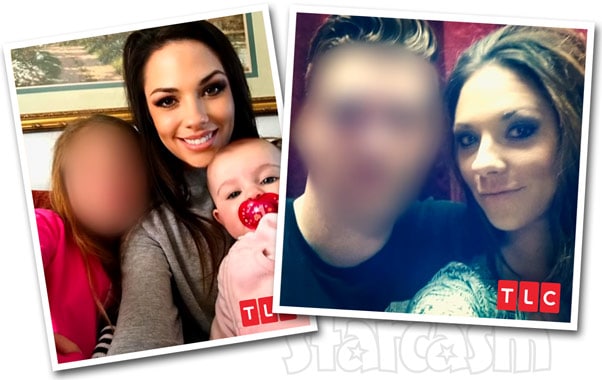 90 Day Fiance: Before the 90 Days star Avery Warner revealed in her on-screen introduction that she has two daughters, but only her youngest has been featured on the show. “I’m a mom of two beautiful daughters,” Avery says in her intro. “Scarlett, who is ten years old, and Sylver, who is two years old. My ten-year-old daughter is from my first marriage, and my two-year-old is from my last relationship.”

TLC shares a photo of Avery and her two daughters (above), but Scarlett’s face is blurred out in the image. They give the same blurred-out treatment to her ex-husband.

Specific children not being featured on 90 Day Fiance, or any reality show for that matter, is nothing strange. Most of the time it has to do with the other parent not granting permission to film. Regardless, numerous fans have been asking Avery about Scarlett since the premiere episode. Avery has avoided answering those questions at any length, but some recent posts and allegations online inspired her to share a lengthy video explaining why Scarlett is not on the show.

“Where’s my second daughter?” Avery begins the caption for her 10+ minute Instagram video (included below). “I encourage everyone to watch this video,” Avery continues. “I explain the question I’ve been getting often about where my oldest daughter is, as well as very sensitive information brought to my attention in the last 24 hours, and I need your guys help to combat some false information circling IG.”

Here is the rest of Avery’s caption, minus the hash tags at the end:

I appreciate anyone who takes some time to listen to the video, and please, let me know if you have seen any odd Avery Warner accounts.

Thanks so much guys for your support. Sending tons of love this Sunday and positive energy ???

I want everyone to know also this is not in anyway for sympathy. This is more me trying to combat false information. I’m not a supporter in online bullying, and I believe it’s crucial to be strong, brave, and stand up to that kind of behavior or it will never change.

I will recap Avery’s video below, but first I wanted to provide a little context. Accusations have recently surfaced online about Avery in regards to her parental relationship with Scarlett, as well as other things. Avery says in her video that the allegations are being posted by a fake Instagram account(s) that she believes was created by her ex-husband (Scarlett’s dad).

I do not know if these are the specific allegations that Avery is addressing in the video, but here is a list described as “10 truths about Avery Warner from 90 Day Fiancée [sic] that she doesn’t want people to know.” The list was shared by the Instagram account @90dayharvestusd: 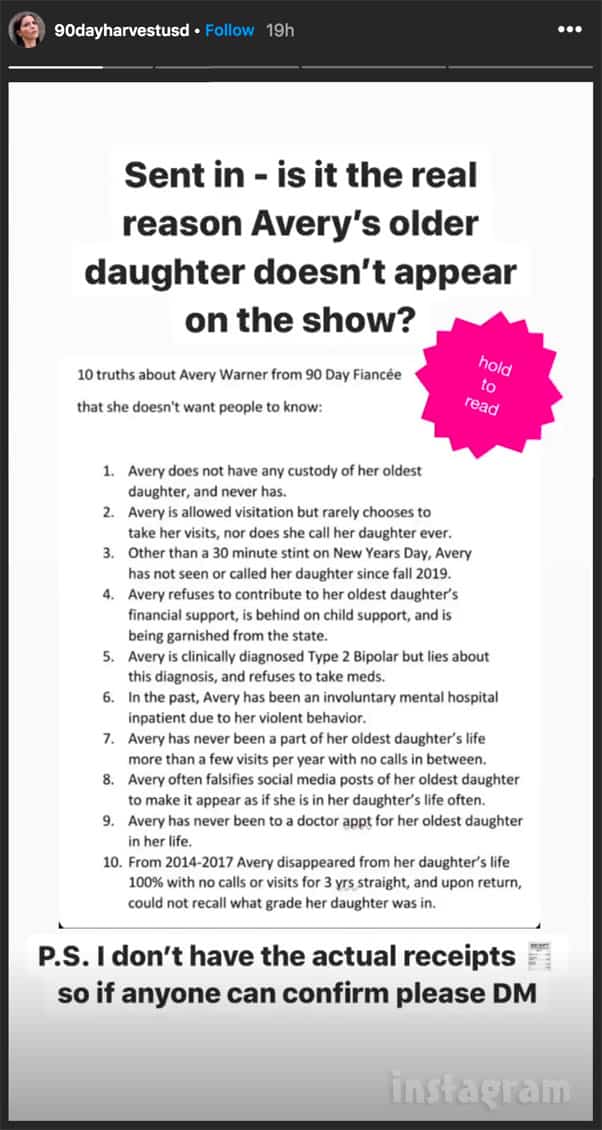 Here is Avery’s response video, which does seem to be addressing a lot of the items on the list above:

Some excerpts from Avery’s video:

My oldest daughter is from my first marriage, and unfortunately I don’t have the best relationship with her father. I never have. We had a very volatile marriage and it was the reason why I had to leave the marriage. Thankfully, I have such an amazing relationship with my youngest daughter’s father. We co-parent very well.

It has been my oldest daughter’s father’s mission, since we divorced almost eleven years ago, to degrade my character, and degrade the person that I am, and put me down as a person, and insure that — he’s not a happy person inside. And it pains him to see that I live a life that is joyful and happy, and I’m constantly pursuing my goals, my dreams, working on myself and trying to improve myself and be a better person.

When we divorced there was a really tough period of time that I went to court for three and a half years. And, unfortunately, because I was a single mother, and I didn’t have a lot of money, and he had a lot of money, that unfortunately things did not waver in my favor due to financial funds. And I do not have full custody of my oldest daughter.

What has been brought to my attention in the last 24 hours is that my ex-husband has created multiple accounts out there to — that are called “The truth about Avery Warner.” They’re just information that he puts out that is completely false information, and it’s just, again, trying to defame my character and saying false accusations about who I am as a person.

It’s actually really disgusting. I mean, to be honest with you, I’ve been dealing with this for the last eleven years of my life. It has been a battle and a struggle to be able to actually have an amazingly good relationship with my oldest daughter.

Since this show has aired, it is something that has caused a lot of issues with my oldest daughter’s father, and he has done a lot of pretty crazy things during this period. And his new thing now is creating accounts to put false accusations out there about who I am as a person. So I would just encourage all of you guys that if you see some negative stuff out there, or if you see an account that follows you about “The truth about Avery Warner” or whatever it is, that I would just hope that you would just continue to focus on what you see as a person — of who I am as a person, I radiate as a person.

There is a lot of really false, terrible, heinous information out there on the internet right now about who I am stemming from my ex-husband, and it’s just stemming from somebody who’s hurting a lot inside. And I feel bad for him, and it pains me to see that he, you know, wants to still focus on this kind of stuff after eleven years. 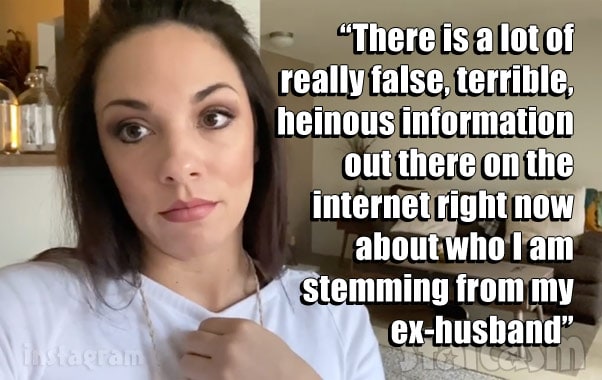 I just wanted to bring this to everybody’s attention because I presume that this is going to be something that is going to come up in the future. I would just encourage that you guys, you know, just use your best judgment. And if you know the person, you know what I’m talking about. I just felt like I needed to get that out there so that everybody understands the situation that I’m in.

Avery responded to several commenters, including one that suggested Avery could pursue legal recourse against the fake accounts and the information being posted. “That is slander and there are legal steps that you could take for him creating those accounts,” the commenter wrote. “I am sorry you are having to deal with that.”

Avery replied by revealing that her ex-husband is an attorney! “Oh yes, it’s too bad he’s a lawyer though, he’s very smart with the court system and how to manipulate it. ??‍♀️”

For those of you curious to know a little more, I did some research to try to find out what I could about Avery’s divorce and custody battle via the Washington court system. Unfortunately, obtaining actual documents is a bit hindered right now because of the coronavirus pandemic, but there is still some information available via docket searches.

Here’s a bullet point recap of what I was able to find out via court records:

• Avery’s ex-husband filed for divorce in September of 2009.

• There was an Order of Default and Decree of Dissolution filed on December 28, 2009.

• The resulting custody battle played out in the courts for roughly eight years, including an initial restraining order, a motion for a CR 35 exam (issued “When the mental or physical condition … is in controversy….” source), multiple notices of intended relocation, and multiple child support modification motions.

• There was a General Recovery Judgment issued in September of 2009 that lists Avery as the debtor and her ex-husband as the creditor. From the docket entry: “ORS ORDER FOR SUPPORT PRINCIPAL JUDGMENT AMOUNT 1,984.00. AMOUNT SHALL BEAR INTEREST @ 12% PER ANNUM”

I also wanted to point out that Avery has posted numerous photos of Scarlett on her Facebook page, and the photos are set to public. The most recent photos of Scarlett were posted by Avery on January 1, 2020, May of 2019, and December of 2018.

Sylver’s dad is currently in another serious relationship. Judging from his social media posts, he seems like an AMAZING dad to Sylver.

I will wrap up this post with Avery’s introduction on 90 Day Fiance: Before the 90 Days in which she talks about Scarlett, Sylver, and her ex-husband: