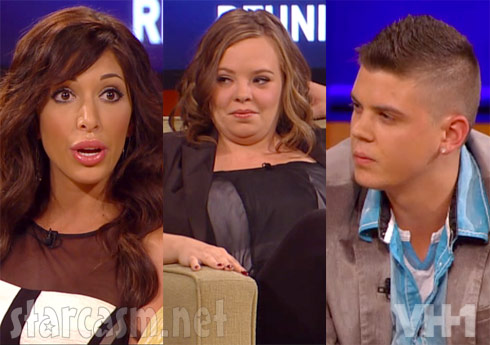 When the Couples Therapy With Dr. Jenn All-Star Reunion continues on VH1 tonight, viewers will see the moment when former Teen Mom costars Farrah Abraham and Catelynn Lowell resolve their feud that was rooted in an interview we did with Farrah back in early June.

If you were unable to watch the clip, here is the transcript:

Dr. Jenn: Now I know that you guys are very active on Twitter, all that sort of stuff, and I know that there’s been some tension between you guys and Farrah on Twitter. What’s that all about?

Catelynn: Supposedly we make poor decisions, I don’t know. We make “poor choices” because I’m having a baby.

Tyler: That’s what we got from it.

Catelynn: Who knows if it’s true, I don’t know.

Tyler: When she was approached by somebody and asked, you know, “What do you think about Tyler and Cate having a baby?” she’s like, “Oh, I’m so disappointed that they’re making poor choices.” And me and Catelynn, we were just, like, we did not understand that at all. And obviously, with recent things she’s been doing… I had to say something. [Click here to read exactly what Tyler said.] I seriously did because I did not know where it came from at all, and I thought it was completely ridiculous.

Shayne Lamas (to Farrah): Did you say that?

Farrah: I don’t know. What source did you hear it from? And what context?

Tyler: It was a quote by you in an article.

Farrah: That’s not how I say it, and I don’t think that’s relevant.

Tyler: So how did you say it? It is relevant! No, it is relevant. Because now we’re all here together I think we should kind of put it on the table.

Farrah: I would hope that you guys just took time — because I’ve heard other things from you of, like, marriage and different planning stuff. I’m not in contact with you, I don’t know what your lives are about, but it’s opposite of what I heard your version being.

It’s obvious there is some confusion about exactly what Farrah said and in what context. In the spirit of full disclosure, clarity and conflict resolution, here is the original audio from the interview with the now-infamous “poor choices” comment by Farrah. 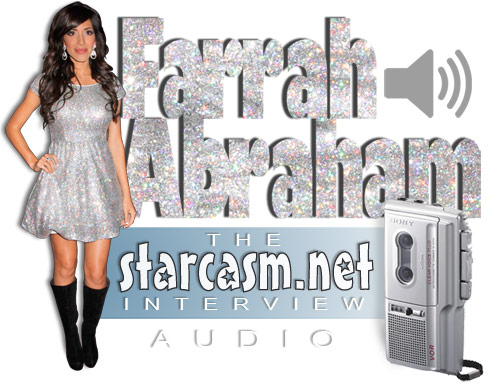 Starcasm: Actually, it’s just been within the past month or so that Catelynn from Teen Mom announced they’re having their second baby, which makes them the first from Teen Mom to have a second baby. How did you react to that news at all?

Farrah: I think… I didn’t really react to that news because I guess you are the first one to tell me that’s actually true… Otherwise I wasn’t seeing it or nobody brought it up. I mean, I think that if they’re having a child, congratulations. And I would just think, you know, because I don’t think they really got married yet.

Starcasm: No, they are still, I think, officially engaged.

Farrah: Yeah, I mean, to each is their own then I guess. I’m not even going to say how I fell about that.

Starcasm: I won’t push you on it… Do you hope that someday in the future if you find that right man that you were talking about that you would hope to have more children?

Farrah: I personally know when I get married and, you know, like I go on trips and I see the world and I have the most best times with my significant other and we know that it’s the right time to have a child and bring it into this world and have it and give it our all, yes, I will have another child.

Starcasm: What do you think are some of the most important lessons that you took away from that first experience of having Sophia?

Farrah: Sophia definitely taught me a lot about life and, you know, I wouldn’t want to act like I’m in denial this time around, you know, of love and the opportunity to have another second child. And I just know… And you know what? I actually took a personal commitment on my own to better my life, get it right and set it forth in the right way. So, if I did want to have a family, I would feel secure and dreamed for and showing my family as much love and attention as possible. So, you know, I bought my own house. I’m starting new companies. I’m doing other things and really just showing that I’m a stable, reliable, great parent. And I took that… I take that very seriously every day and it’s no joke. So, I feel and I would hope with others who are getting in, you know, to be pregnant with their second child that they have a home, that they have a stable financial situation and that they have a supportive family. I can’t even tell you if I had to go through all those same struggles again that I had to deal with with first having Sophia and I didn’t like that and I knew my daughter deserved better, it would really crush me and it would very much hurt me. So, you know, I’m very sad to hear that the other Teen Moms don’t take that as serious as they should. And, I think that’s something that… You know, I wish them all the best, but it does make me very sad to see them still make poor choices.

And just in case you were having doubts about watching, this clip in which Catelynn accuses Farrah of selling her vagina might convince you otherwise:

* It should be pointed out that Farrah did LITERALLY sell her vagina, and you can purchase it yourself thanks to her line of sex toys molded from her own body.