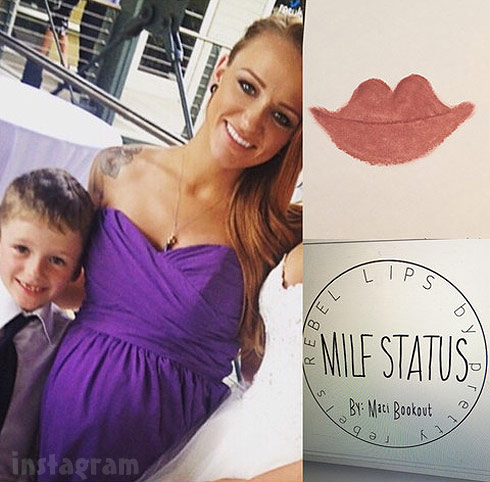 Maci also shared her excitement about the new shade on Twitter:

If you follow the link you will find the shade available for $25. The product description reads, “Maci chose this amazing, effortlessly chic shade for all you mamas out there like her who want to look fabulous but do not have a lot of time! CREAMY texture. (pale muted/bridal pink/plum nude).”

On Instagram some commenters raised concerns about the name of the shade, but Pretty Rebels was quick to point out that it was chosen in fun:

Commenter: This is a horrible name choice.

Pretty Rebels: it was chosen very light heartedly! Not to be offensive or to be taken seriously AT ALL! Sorry you feel that way

Commenter: That price though

Pretty Rebels: hey doll! It’s a high end lipstick.. Definitely not on a drug store level.. I would say it’s higher quality than Mac so the prices reflect that! The “Pretty Rebel” code will work for it if you’re a first time buyer with Pretty Rebels though! Xoxoxo