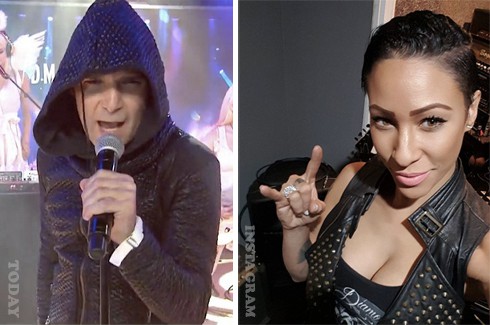 Audio has surfaced of a vicious voicemail from Corey Feldman to a guitarist who backed out of performing at his infamous Today Show gig.

Guitarist Krystal Khali told Page Six that she decided against appearing with the 80s teen heartthrob on national TV. “I kind of knew it was gonna be a sh** show and an embarrassment.” She added that Feldman’s dancing “was distracting . . . I couldn’t look at him.”

Khali wound up being prophetic as the bizarre performance was panned so badly on social media it left Corey bedridden and depressed.

Rocking in my studio! #CM3studio

Khali shared a voicemail that Feldman left after he discovered that she had changed her mind. Warning, the rant is filled with expletives:

“If I don’t [bleeping] hear from you, your name is [bleeping] mud. Let me tell you, don’t even think about coming back to LA because you’ll never get another [bleeping] gig in that town. Ever. I will [bleeping] make sure everybody knows what a piece of [bleep] you are,” Feldman exclaimed.

After a tear-filled Facebook post, Feldman took to Twitter in ALL CAPS FASHION to announce that all the negativity would not dissuade him from doing his thing:

I JUST WANNA SAY I LOVE MY FANS! I ALSO THINK ITS FUNNY, when ppl w 0-100 followers tell me I'm a loser, & Hav achieved nothing! Thanx! Lol

I ALSO WANNA SAY IM EXCITED 2 B RETURNING 2 @TODAYshow & AM GR8FUL 4 THE OPPORTUNITY 2 GOV MY FANS MORE OF WHAT THEY LOVE…THE UNEXPECTED!

IM QUITE CERTAIN R NEXT PERFORMANCE WILL SHOCK THE WORLD AGAIN, WE GOT NOTHING 2 PROVE, & VNOT EVEN TRYING 2, BUT WE R DOIN IT 4 LOVE! ❤️?

Khali told Page Six that she met Feldman in 2015 and played a show with him, adding that the organizer offered her a room but that Feldman wanted her to stay with him and his so-called “maingel” Courtney Anne Michelle. “I got the impression that Corey was wanting to lead it into a sexual direction, but he didn’t say anything outright… No one was disrobing,” she stated.