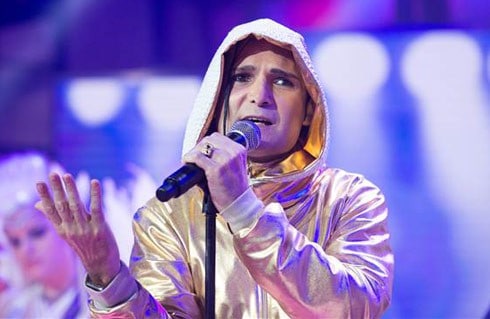 Feldman got widely panned for his previous on-air performance of the song “Go For It” off his album Angelic 2 the Core. The social media backlash caused Feldman to openly weep during a streaming video response via Facebook. A vicious voicemail later surfaced of Feldman cursing out guitarist Krystal Khali who backed out of being a member of his band just before the infamous gig.

This time around Feldman, dressed in a gold hoodie, sung his song “Take a Stand.”

FULL VIDEO of Corey Feldman performing Take a Stand from return visit to the Today show:

And an intro video of Feldman before round 2 defending his viral act:

“We’re doing something new that hasn’t been done before. But it’s all about innovation and being an artist, and we can’t be afraid to share our art. This song by the way is for America. We are at a time right now where the world needs to focus really on peace and love and tolerance,” Feldman said.