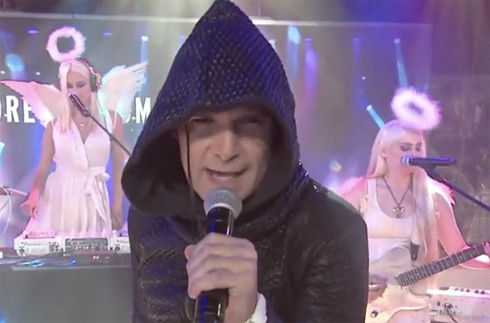 ’80s teen heartthrob Corey Feldman was left bedridden and in tears after his performance of his song “Go 4 It” was panned on social media.

Feldman emerged on stage for his Today show appearance dancing strangely while donning an all black hoodie outfit with “Corey’s Angels” as his backing band. The backlash left the 45-year-old devastated as he revealed in a since-deleted Facebook live video post.

“We just wanted to tell everybody that, like, it’s been really painful. We put ourselves out there and we did the best that we could. And, like, I’ve never had such mean things said about me. Like constantly…  All we can say is that we tried really hard… Because we love our fans and we just wanted to give them the best show that we could. But we don’t deserve … these things that are said about us are awful,” he said while sobbing.

The Stand By Me and The Lost Boys actor added, “It was a song, okay? It wasn’t that weird. I’m sorry if it’s not good enough for you, but you don’t have to beat us up. I just want to say that, like, why is it okay to, like, publicly shame us? … I don’t understand … It’s, like, not PC to, like, say somebody is fat or somebody is white or somebody is black or somebody is yellow or green or if they have a short leg or if they have a missing finger. Like we can’t talk about these things. But it’s okay to bash Corey Feldman and the Angels… We can’t get out of bed right now. We’re petrified to even go out … And I’m sorry, but we just wanted the world to know, like, we’re really freaked out over this and it’s really not fair… Public shaming should not be accepted, no matter who you are… It doesn’t matter if they’re a celebrity or not. We deserve love and we deserve, like, normal life … It’s not okay, it’s not acceptable to call us freaks, weirdos, losers, whatever.”

Feldman made another video post that he has left up in which he thanked his devoted fans for supporting him:

Update! Did someone try to murder Corey Feldman with a poisoned syringe? ?