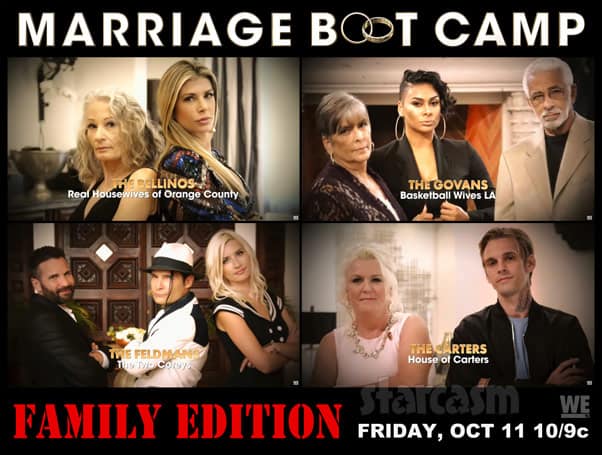 WE tv has just released the first preview trailer for the new season of Marriage Boot Camp: Family Edition featuring an eclectic cast that includes a Real Housewife, a pop singer, a Basketball Wife, and…Corey Feldman.

“Four famously dysfunctional families prove crazy is relative on the highly anticipated new season of Marriage Boot Camp: Family Edition,” reads the network’s press release accompanying the trailer. “Will the walls come crumbling down when the most explosive relationships enter under one roof?”

Here is the trailer for the new season, which premieres Friday, October 11 at 10/9c:

Former Real Housewives of Orange County star Alexis Bellino continues to celebrate her divorce from ex-husband Jim Bellino as she makes her second return to reality television of the year. The 42-year-old mother of three follows up her reported appearance on Below Deck with new man Andy Bohn by entering the Marriage Boot Camp house with her mother, Penelope. Penelope is also divorced, and the mother/daughter duo hope to work through years of pent up resentment.

Basketball Wives: LA star Laura Govan brings both of her parents into the house. Laura, mom Gloria, and dad Michael “struggle to break free from a daunting past and battle to get to the truth” while under the watchful eyes of Dr. Venus Nicolino and Dr. Ish Major.

Troubled pop star Aaron Carter will be accompanied by his mother Jane in what WE tv bills as “the most dramatic momager and son reunion ever!”

Actor Corey Feldman and his wife Courtney Anne Mitchell are hoping that boot camp will be what their marriage needs. Meanwhile, Corey’s brother Eden will also be moving in as he and his brother try to come to terms with “past trauma and abandonment” which has plagued their relationship. “But will these brothers put their pride aside to bring the family back together?”

The press release also teases an early exit for one of the house guests! “When a pop-up gift shop unravels their core issues, a gift exchange brings on despair and sends someone running before they even unpack their bags!”