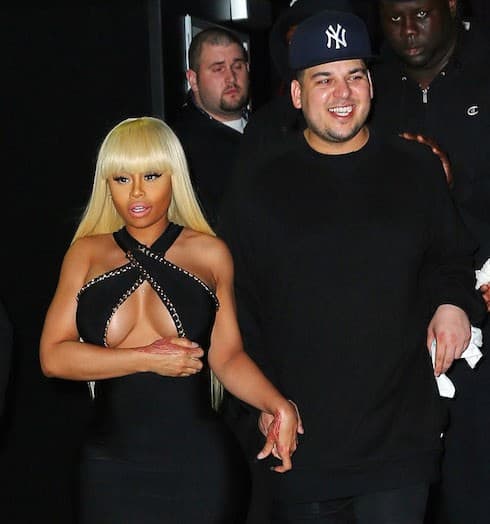 Rob Kardashian 2016 has been a whirlwind of emotion, but most of the rumors and stories involving Rob have been free of discord–until now, that is. In the wake of last week’s rumors about a brief, tumultuous breakup between himself and fiancée Blac Chyna come this week’s dispatches, which claim that Rob is involved in spats with every single one of his family members. Compounding the feuds is the report that filming for Rob and Blac’s forthcoming reality TV programme is not at all going well, and that the show is now in jeopardy.

A new TMZ report, since substantiated by BET, claims that Rob has been skipping out on filming for he and Blac’s show. Apparently, Rob is a no-show because he “feels the show is compromising his relationship with Chyna;” unsurprisingly, however, this means that the as-yet-untitled E! show is now in “serious trouble.” Rob is said to believe that Keeping Up With The Kardashians essentially ruined the Kardashian family dynamic even as it brought the family untold wealth and fame, and the 29-year-old is worried that the same thing will happen to he and Blac even before their child is born.

On top of that, Rob recently smarmed out at Kris Jenner in a strange telephone call that Kourtney Kardashian managed to film and upload to Snapchat. Coming as it did after reports of Rob’s erratic behavior on set, the video appears to have left many fans worried about a potential meltdown, the likes of which they’ve seen before:

As if all that weren’t enough, a new Inquisitr article alleges that Rob and Caitlyn Jenner are feuding–and, indeed, that Caitlyn has a serious beef with the entire Kardashian family. Rob committed what is a mortal for the social media-conscious family: following last week’s total purge, he re-followed every one of the Kardashians and Jenners on Instagram, with the lone exception of Caitlyn. “Rumors of a feud between Jenner and her former step-family have been swirling for the past few months,” reports the site; which pointed to Caitlyn’s absence from Khloe’s June birthday party as further evidence. (Supposedly, the family believes that Caitlyn “threw Kris under the bus” during her July 2015 coming-out interview in Vanity Fair, and the bad blood still lingers.)

Of course, this is the Kardashians we’re talking about, which means there are always conflicting rumors. And a brand-new People article states plainly that things with Rob are relatively peachy. Filming for Rob & Blac’s show has had “bumps in the road,” but is “going smoothly,” per that magazine’s sources; “There haven’t been any problems with production,” says their insider. The insider went on to say that the show “[is] set up to follow the ups and downs of their lives and yes there are ups and downs, but that hasn’t affected production at all. The network is extremely happy so far.” Which could be a coded way of saying “It’s been non-stop drama and every rumor you’ve heard is true, but, the more drama, the better.” At the very least, it’s probably a good thing that the show doesn’t have a premiere date.

Kylie Jenner is ready to get pregnant again