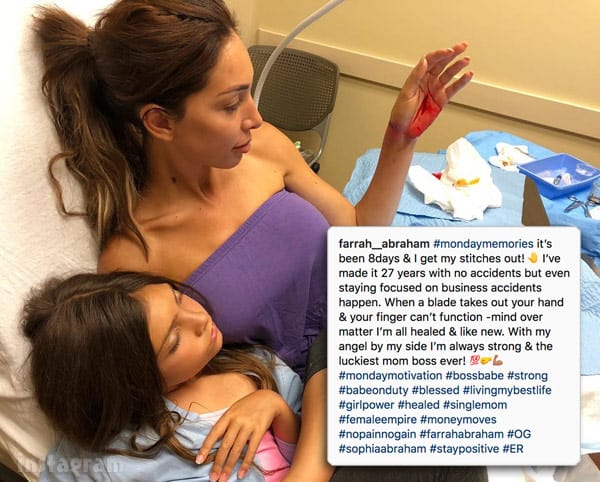 Former Teen Mom star Farrah Abraham is no stranger to going under the knife, but not her own! In a series of rather graphic images and videos posted earlier today, the 27-year-old revealed that she required multiple stitches after slicing her hand severely.

“I’ve made it 27 years with no accidents but even staying focused on business accidents happen,” Farrah captioned a photo with Sophia (above) just after the stitches were put in. Farrah continues:

When a blade takes out your hand & your finger can’t function -mind over matter I’m all healed & like new. With my angel by my side I’m always strong & the luckiest mom boss ever! ???? #mondaymotivation #bossbabe #strong #babeonduty #blessed #livingmybestlife #girlpower #healed #singlemom #femaleempire #moneymoves #nopainnogain #farrahabraham #OG #sophiaabraham #staypositive #ER

The caption started off a bit confusing as Farrah wrote: “#mondaymemories it’s been 8days & I get my stitches out! ?,” which I initially thought meant that she suffered the injury eight days ago — but I’m now thinking means that she will have the stitches in for the next eight days.

Farrah also shared a series of photos in her Instagram story, as well as a brief video clip that was also shot just after the wound was stitched up while still in the ER. “It’s mouth is shut,” Sophia exclaims, which I assume is a reference to the fact that the gash on Farrah’s wrist would sort of open and close like a mouth when Farrah flexed her thumb.

Here are two photos of Farrah’s wound before the stitches, with the Froco mascot Coba helping to keep things SFW. Just click the image to see the original uncensored pictures: 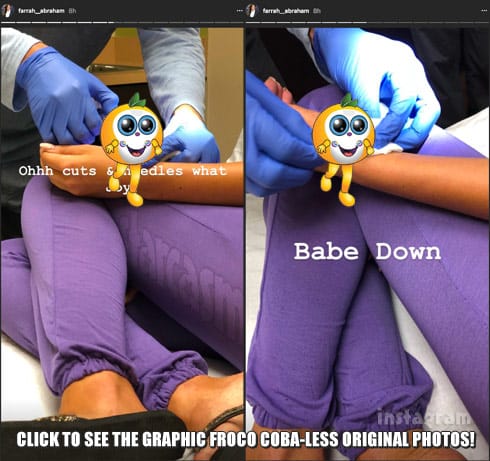 It’s still unclear exactly what happened. I assumed that it was simply an injury sustained as Farrah was preparing a meal for her and Sophia, but her mention of “staying focused on business” makes me think that it might have been something for her new series of business videos that will reportedly be released later this week. We have reached out to her team to see if we can get any more info, and will be sure to update if we hear back.

UPDATE – We spoke with Farrah Abraham’s dad, Michael Abraham and got the scoop! “Farrah was working on a project in her stores and had a tool cut her left wrist,” he reveals. “She was very lucky,” he says, adding:”it missed her tendon and main arteries, but still had a lot of stitches.” Michael emphasisses that Farrah is usually very safe, but “things happen.”

Michael’s fiancée was with Farrah at the time of the accident, and served as her Abrahambulance getting her to the ER. “I’m glad Amy was with her and took her to the emergency room and got her all fixed up!!” he says. And Michael assures us that it won’t be long before Farrah is back to 100%. “Farrah’s on the fast mend now!!”

After her return from the emergency room, Farrah posted a live video with Sophia from her recently closed Froco frozen yogurt restaurant, where she looks to be helping with the process of moving out. She shared her gratitude for having the experience of opening and running Froco before expressing her excitement about moving on to distributing the Froco brand in grocery stores.