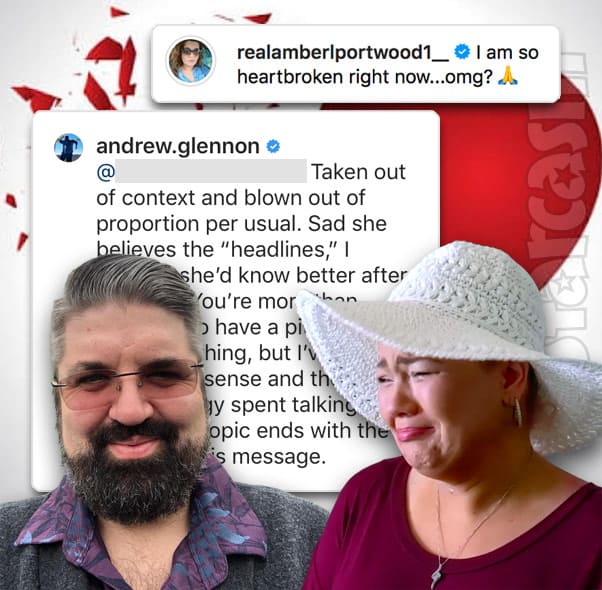 Teen Mom OG stars Amber Portwood and Andrew Glennon are scheduled to be in court tomorrow stemming from her arrest after a heated altercation earlier this month in which she allegedly hit Andrew with a shoe and tried to break down a door with a machete to get to him and their some James. Both Amber and Andrew have been relatively quiet on social media since her arrest, but Amber has made subtle references to Andrew potentially cheating on her, and Andrew has since responded.

“Cheating is a choice not a mistake,” Amber wrote on Instagram on July 16, before quickly deleting her post.

Fast forward one week and we have Radar Online reporting that Andrew is “moving on” and “has been talking to another woman and has even invited her to Indiana!”

Radar’s source says that Andrew has been text messaging another woman since Amber’s arrest. “Their friendly interaction turned flirty on his end, as he asked for photos of the woman,” Radar reports. “She sent him photos of herself, nothing inappropriate,” the source says. “He told her how beautiful she is.” The source adds: “He wanted her to come to Indiana, but she declined.”

After the Radar Online story was published, Amber posted a photo of a shattered heart on Instagram and captioned it by writing: “I am so heartbroken right now…omg? ?”

Someone shared the url to the Radar Online story in a comment posted to Andrew’s Instagram. “In case you haven’t seen it this hit the news and made its way to Amber who posted a picture with a broken heart,” the commenter wrote. “If you love her even a little you shouldn’t do things like this.”

“Taken out of context and blown out of proportion per usual,” Andrew responded. “Sad she believes the ‘headlines,’ I thought she’d know better after 10 years. You’re more than welcome to have a pity party for literally nothing, but I’ve no time for the nonsense and the extent of my energy spent talking on the sordid topic ends with the period of this message.”

Meanwhile, Amber’s Teen Mom OG co-star Catelynn Baltierra has been very openly sharing her support for Amber, and she reveals that she is visiting Amber today. “I love you so much ❤️ see u tomorrow,” Catelynn wrote in response to Amber’s post on Tuesday.

“There is always two sides to every story…” Catelynn tweeted earlier today. “u r only hearing one side ? sooo ✌? out I love you @AmberLPortwood I’m on my way to you now ❤️.”

Catelynn received some backlash for showing Amber support, with some accusing her of condoning abuse. Catelynn returned to respond with another tweet:

I DO NOT condone abuse! I AM supporting a friend In need! That’s what friends are for ??❤️ when I went through all my crazy mental illness stuff my friend helped, me supported me, and loved me!!! And I’m going to do the same!

It’s unclear if Catelynn plans to attend Amber’s court hearing tomorrow, or if MTV cameras will be rolling.

#TeenMomOG Amber Portwood allegedly used a machete and took a handful of Klonopin pills during her altercation with boyfriend Andrew Glennon. She is now facing 3 felony charges. https://t.co/cuNN15MjoT