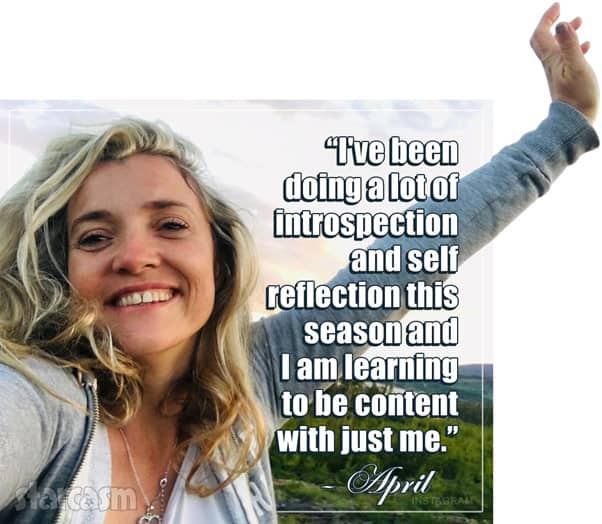 Former Seeking Sister Wife star April Briney shocked her family, show producers, and eventually show viewers when she packed up her six children last May and told her family they were headed for a hike. Instead, she and the children went back to their home state of Utah where she would eventually divorce her husband Drew on June 28 of last year.

Becoming a single mom of six overnight after twenty years of marriage is quite the life altering event! Adding in the fact that she also left her two sister wives and nine other children only made it more of a dramatic contrast.

So how is April doing more than a year after her divorce was finalized? Pretty darn well it would seem!

April took time out from camping in the Utah wilderness to share an update on Instagram earlier this month. She reveals that her children spend half the summer with their dad Drew in Oregon, which leaves her alone with the family’s new Akita puppy. “Our puppy’s getting bigger. She has been good company for me while the kids are away with their dad for the summer,” April begins her post from July 13. She then begins to open up about her experience being in a plural marriage — and leaving it after so many years:

I feel reticent to start a new relationship when I have so much work to do in myself. They say whatever you didn’t learn in one relationship will carry into the next one. This was actually a fascinating dynamic I saw play out with Drew and the other women and in some ways a really nice benefit to a plural lifestyle. They each had an influence for good on him in ways I couldn’t. Relationships are such a refiners fire. They bring out the best and worst in us don’t you think? And in a plural relationship that is only magnified. So many things to trigger us and help us grow. I’ve been doing a lot of introspection and self reflection this season and I am learning to be content with just me.

April concludes her post by expressing her gratitude to those who have been supportive over the years, as well as those who have not. “I want to thank everyone who has supported, encouraged, and prayed for me, my family and my sister this last year,” April writes. “We have been lifted on the wings of angels and sustained through many a difficult time. Thank you my friends. And to my haters, thank you for giving me impetus to see my flaws.” April concludes with a string of hash tags that includes #godisgood, #trustinghimdaily, #akitapuppy and #provoriver.

As you may have noticed, April also thanks everyone who showed her sister support over the past year. Similar to April, her sister Meadow recently went through a divorce with a large number of children (7). Within days of finalizing her divorce, Meadow was diagnosed with stage 4 metastatic breast cancer that had traveled to her lymph nodes, lungs, and surrounding tissues.

Family and friends worked together last month to show Meadow love by organizing a benefit ball at which Meadow got to be a princes for the night. April shared a gallery of pictures from the event on Instagram on June 30, along with a heartfelt and genuinely appreciative caption:

It was so special to see my sister Meadow become a princess for the day. Money for a spectacular dress, a gorgeous facility and a limo ride all donated by a few beautiful men who found it in their heart to spoil her and lift her up during the most challenging season of her ongoing endurance. As I drove her to get her nails done, try on dresses and get her wig placed, puss was oozing out from under her fingernails and her face momentarily crossed in pain. What a beautiful distraction to have a ball to look forward to…and to dance and to thrive and live in the moment. Thank you to everyone who planned, sacrificed, traveled and gave support to this beautiful vibrant human that radiates life. #meadowalexander #cancerwarrior

Meadow has since completed her chemo treatment as she continues her battle. According to her Facebook page, she was recently treated to an adventure getaway with her children. She is now in Austin, Texas, but it is unclear what the reason for the trip is.

I don’t believe that April was ever a big fan of sharing her life on reality television, and perhaps it is a bit selfish on my part, but I really wish that TLC and show producers had elected to continue to film April and the rest of the Brineys after their split. April’s former sister wife Angela expressed a similar sentiment from her perspective:

The network had a very unique opportunity to tell a story that’s never been told before – that of the family left behind when a plural wife leaves. But again, we agree that this heavy of a story was not a good fit for this platform. The story of those who leave has been told many times, but we often don’t consider how the remaining family deals with that grief and how they try to move on in life.

Perhaps we might see a return of the Brineys on Seeking Sister Wife Season 3? It certainly seems like both parts of the family are in a good place now. And of course producers would encourage Drew to court another wife, which would certainly be a unique experience for viewers — as well as Drew, April, and the rest of the Brineys!