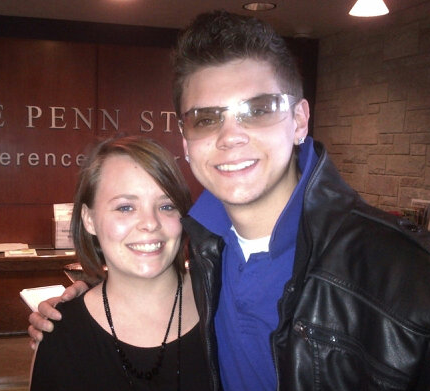 Catelynn Lowell is in defense mode after rumors hit the web and newstands that she was expecting a baby with her fiance Tyler Baltierra. The couple is engaged and planning to wed, but they are not planning on starting a family anytime soon! Catelynn and Tyler aren’t rushing down the aisle either!

In the latest issue of Us Weekly, Catelynn sets the record straight saying, “We’re getting married next year and I don’t want to be big and huge in my wedding dress.” The couple set the date for July 13, 2013 and not only will she not be pregnant, Catelynn has recently lost an impressive 20 pounds! Like any bride-to-be, she wants to look her best on her big day. They hope Carly can make it to their wedding next year, but they still have to have the discussion with Brandon and Teresa. Catelynn’s BFFs Maci and Farrah will also attend, she also wants Amber to go, but that might be doubtful.

Even after they wed, they will still be putting off having a family for a few years — and for good reason. “I’m still waiting on my degree, and want to get married — and be married for four years — and make some memories ourselves before having kids.” Catelynn and Tyler have just wrapped filming on season 4 of Teen Mom. Although they would have liked to film their wedding for the show, they didn’t want to rush into it. MTV may film the wedding anyway as a special. Catelynn: “I really, really want my fans to watch me and Tyler say our vows.” Their adoring fans tell them that’s what they want to see all the time, so they want to oblige, also [spoiler alert] the Teen Mom finale doesn’t end on a good note for them. “There’s a fight between my mom and Butch that really gets inense. I don’t want that to be the end for us. We want our happy ending.”

They’ve already picked out the venue. The pair plan to marry in Olde World Canterbury Village, a 21-acre historical landmark in Lake Orion, Michigan. They plan to use “Won’t Give Up” by Jason Mraz as their first dance song at their wedding.

Dealing with the tabloids may sometimes be an annoyance, but Catelynn takes it all in stride. She explains, “I just laugh because I’m like, ‘Okay people, believe whatever you want,’ but in four months when a baby’s not popped out, you’ll know I’m not pregnant.” Catelynn also told the mag that she has been on birth control since having their first child, Carly, who they gave up for adoption in 2009. She also said she had to call Brandon and Teresa, Carly’s adoptive parents, to tell them that the In Touch pregnancy report wasn’t true because “They freak out when they see those kinds of things.”

Tune in to Teen Mom‘s fourth and final season every Tuesday night at 10/9c.