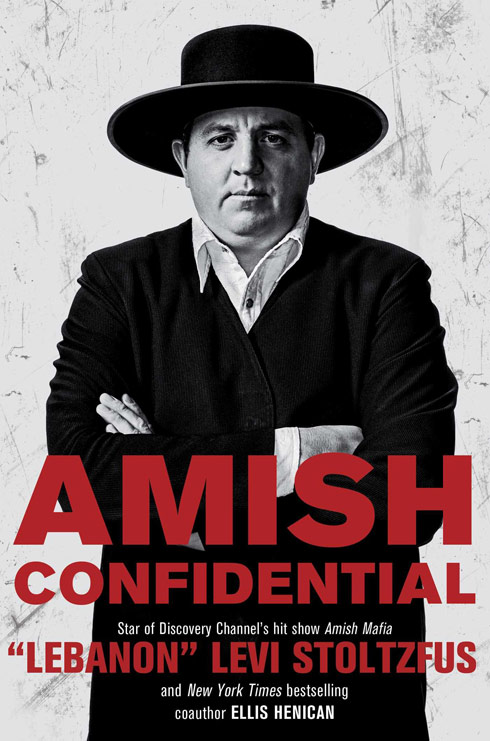 Tonight is the beginning of the end for Discovery’s popular horse-and-buggy gangsta series Amish Mafia as the network airs the premiere episode of the show’s fourth and final season. For fans fearful that one more season of the Pennsylvania Dutch Tony Soprano’s buggy thuggery wont be enough, you can can get an additional Lebanon Levi Stoltzfus fix thanks to his brand new book, Amish Confidential, due out March 31.

Curious what exactly Lebanon Levi would be writing a book about? Could it be an Amish take on Sun Tzu’s Art of War, with everything you’ll need to start your own black-hatted mustache-free crew? Or perhaps it will eschew the violent necessities of Levi’s unsavory duties as the designated unbaptized enforcer and focus instead on yummy Amish recipes?

Neither of these is the case (unfortunately or fortunately) as the book is instead described as “a sizzling tell-all about Amish life today” by the publisher.

“From the forbidden joyrides to the senseless shunnings to the colorful family feuds, he shares his frank insider’s view of this fascinating and secretive society,” the description continues. And the rest:

You’ve seen the pretty postcards and the shiny tourist brochures. Now, Amish Confidential takes readers beyond the buggies, bonnets, and beards—into the hidden heart of back-roads Amish country. The all-night field parties. The prohibited automobiles. The nosy neighbors and prissy tattletales. It’s all here: the many “English temptations.” The stitch-and-bitch quilting bees. The sex, alcohol, and illicit Wi-Fi. And the random acts of kindness and remarkable forgiveness, too.

Interest in the Amish has never been greater. The tourist counts keep breaking new records. Amish Mafia is back for a fourth blockbuster season on TV, joined now by several spinoff shows. Amish Confidential taps right into America’s fresh fascination with the throwback Amish. Stoltzfus weaves his never-before-told personal story through some high-profile Amish episodes that rocked the news in recent years, including the Nickel Mines shooting massacre, the Amish sisters’ farm-stand kidnapping, and the Amish-Pagan drug gang. As America’s most famous Amish tough guy makes clear on every page, there is nothing plain or simple about the plain-and-simple life.

Here’s a little promotional trailer for the book, which is actually the commercial for the new season of Amish Mafia with the book cover tossed in at the beginning and end:

Amish Confidential is co-written by Newsday columnist and Fox News analyst Ellis Henican, whose had a bit of success co-writing high-profile books. From Wikipedia:

In 2010, Henican teamed with New Orleans Saints coach Sean Payton to author Home Team—a New York Times Best Seller (Penguin Books) recounting the story of post-Katrina New Orleans and the unlikely rise of the Saints to a Super Bowl championship. In 2011, to commemorate the tenth anniversary of the death of NASCAR driver Dale Earnhardt, Henican wrote another bestseller In the Blink of An Eye: Dale, Daytona, and the Day that Changed Everything (Hyperion_Books) with driver Michael Waltrip. In addition he has ghost-written two books for Simon & Schuster—an inside account of the nation’s largest drug-treatment program and a best-selling motivational business book. He is a sought-after public speaker. His articles have been published in various national magazines, including The New Republic, Cosmopolitan and Penthouse. His work has been recognized with the Meyer Berger Award for Distinguished Writing about New York City, the National Clarion Award for Column Writing and shares of two Pulitzer Prizes for Spot News.

Lebanon Levi’s book Amish Confidential is currently available for pre-order at Amazon — just click the link to get yours now!

Want to keep up with Lebanon Levi, but without having to travel to Pennsylvania or risk having your house burned down? Then you can follow him online and on social media at these links: