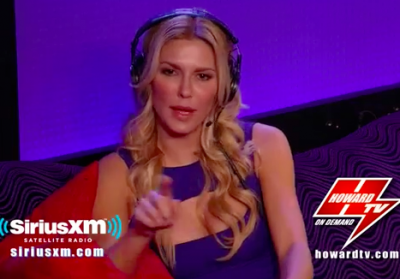 Brandi Glanville appeared on The Howard Stern Show yesterday morning as part of her promotional duties for her just-released book Drinking And Tweeting. Of course, true to form, Brandi did not hold back. She dished on her Real Housewives of Beverly Hills co-stars, her ex-husband’s dog, and his “less attractive” new wife.

Howard had plenty of questions for Brandi about her ex Eddie Cibrian’s much publicized affair with LeAnn Rimes, including Brandi’s personal estimation of LeAnn’s looks. “I don’t think she’s unattractive,” Brandi explained, “[But] she’s way thinner than I am. It’s not a hot look.”

Howard then asked, “Why do you think he went with her? Do you think it was money?”

“No. Now I think he stays with her because of the money, but he told me he was cheating the entire marriage,” Brandi said. “I think it’s just like extra p—-. He just likes it.” (Brandi said in her book that Eddie was constantly cheating, and even gave her HPV.)

Brandi also told Howard that Eddie “must be” living off LeAnn’s income at this point since he is “not working” and “just bought a really fancy mansion.” But Brandi hopes that Eddie will soon find work — especially since that means more cash in her pocket. “If he makes more money, I get more child support.”

As for her co-stars, Brandi didn’t have much good to say either. “Those women were horrible. They are just horrible,” she said, going as far as to call them “c**ts.”

Brandi then revealed their salaries as well as her own, explaining that although she signed on as a “friend of the housewives” for $18,000 during season 2, she has since been upgraded and for season 3 was paid $136,000. Still, the other girls are making significantly more than her at $250,000 a year.

Regardless of her lower salary, Brandi couldn’t be more grateful for her role on the show and all of the opportunities that have come her way because of it.