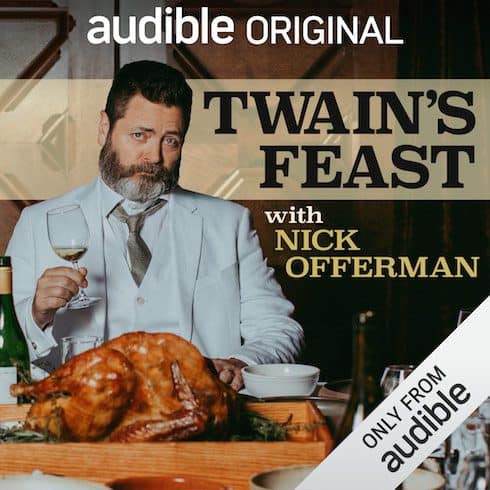 I should be up-front about this: We are unabashed admirers of Nick Offerman. Parks and Recreation lives forever in our hearts; Making It was an unexpected summertime delight; the Lagavulin “My Tales of Whisky” Yule Log Video has been a holiday staple since its release.

So the fact that Offerman has narrated a humble audiobook dedicated to the culinary whims of one Mark Twain, and done so just in time for Thanksgiving makes me do a little dance. The book is Twain’s Feast, written by Andrew Beahrs, and originally published in 2010. Its premise is at once simple and audacious: in the winter of 1879, while in the middle of a European tour, Twain found himself quite homesick. He dealt with this as we all should: by coming up with an eighty-course menu of the American dishes nearest to his heart, all of which he intended to eat as soon as possible upon returning home.

Beahrs’ book sets out to recreate a few of Twain’s selections, using them to illustrate the myriad ways in which factory farming and widespread development have changed America’s palate. The results can be a bit depressing. Some of the dishes have all but disappeared from American life; though it was once an East Coast staple, in 2018 you aren’t likely to find terrapin soup anywhere other than the fanciest (or most turtle-loathing) restaurants:

But the Twain’s Feast audiobook does Beahrs’ text one better, by staging an actual feast complete with as many of Twain’s dishes as possible. Last spring, Offerman and Beahrs hosted the banquet at the Mark Twain House in Hartford, and were joined by Wanda Sykes; professor Christina Greer; and Jeff Tweedy, the lead singer of Wilco. And the whole thing was prepared by chef Tyler Anderson, who you may recall was a member of the Top Chef Season 15 cast last season.

The bawdy audio from that dinner party is included on the Twain’s Feast audiobook (and is the main reason why it contains a “racy content that may not be suitable for children” disclaimer from Audible). So the audiobook is more faithful to the spirit of Beahrs’ book than to its letter. Even if you’re a purist, though, all you need to do to get past the deviation is put the finished product on while you’re in the kitchen laboring over your own Thanksgiving feast. Pulling a cork isn’t necessary, but it does help (and if it’s the night before Thanksgiving or even the day of, you’re probably already drinking something anyway).

The Twain’s Feast audiobook, narrated by Nick Offerman and complete with many a rousing culinary tale, is available from Audible. It’s $8.95 unless you sign up for a free 30-day Audible trial, in which case the audiobook is also free.

And if you’re so inclined, you can purchase the original book — Twain’s Feast: Searching for America’s Lost Foods in the Footsteps of Samuel Clemens — right here.