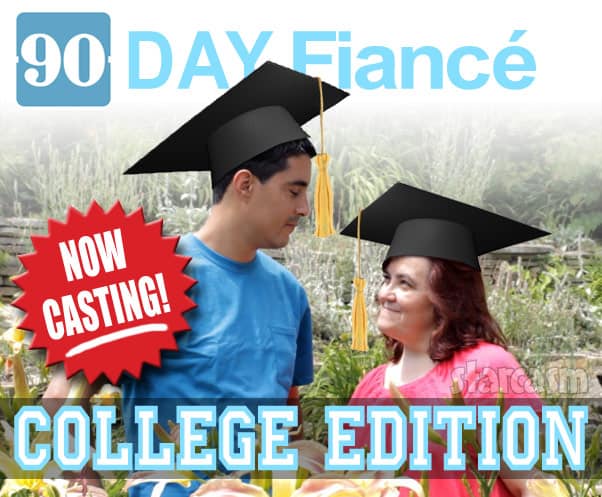 After the HUGE success of their latest 90 Day Fiance franchise installment The Other Way, show producers have just announced they are casting for a potential new spin-off tentatively titled 90 Day Fiance: College Edition!

The official announcement states that Sharp Entertainment is currently “casting couples for a new documentary series with a major cable network. Specifically, we are casting students (college/university/graduate students) who are in a relationship, in which one partner in the relationship is an international student (studying in the U.S. on a student visa).”

Producers are looking for students who will be graduating soon, but there is some flexibility. “We are ideally looking for international students who are graduating by the end of this year.” The timing seems a bit off since most college and university students graduate in the spring.

The casting call is open nationwide with production starting at a date to be determined.

Here are a few links where you can apply:

So what do you think about 90 Day Fiance: College Edition as a concept? My initial reaction was a bit meh, simply because it doesn’t seem like a very distinct concept from the regular show. But, the more I thought about it, the more I liked the idea of limiting the cast in this way.

Regardless, Sharp Entertainment and TLC are batting 1,000 on these shows, so I would tune in for 90 Day Fiance: Canine Edition if they aired it! WOOF!

*NOTE: That is not an official casting image at the top of this post. Danielle Jbali was taking college classes though, so who knows?