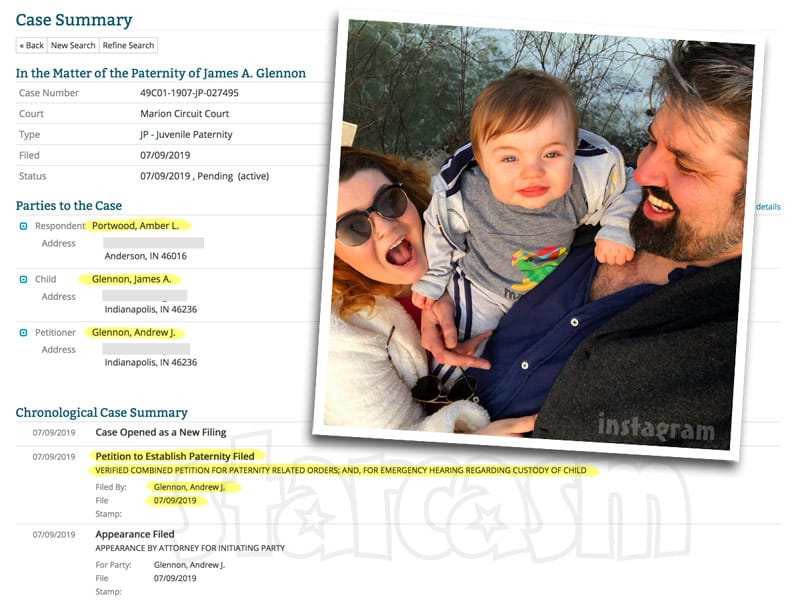 Four days after Teen Mom OG star Amber Portwood was arrested for domestic battery after allegedly assaulting boyfriend Andrew Glennon with a shoe, Andrew has officially filed a Petition to Establish Paternity in regards to their son James, which includes a request for an emergency hearing regarding custody.

The petition was filed in Marion Circuit Court earlier today. We have not been able to get a copy of the filing yet, but online records indicate that it is a “verified combined petition for paternity related orders; and, for emergency hearing regarding custody of child.” Amber Portwood is named as the respondent, and James Glennon is identified as the child.

Oddly, the filing includes addresses and lists an Anderson, Indiana address for Amber, but an Indianapolis address for Andrew and James. It is unclear if this means the couple is currently living separately with James currently staying with James. The Indianapolis address is the house featured on recent seasons of Teen Mom OG, and is also the address where the altercation took place that led to Amber’s arrest.

The Anderson address is Amber’s old house, which you can see in these photos of Amber with ex boyfriend Clinton Yunker.

A Petition For Paternity is Andrew taking the steps to legally establish himself as James’ father. (Remember, he and Amber are not married.) Establishing paternity is usually the first step before establishing guidelines for things like custody and/or child support. Given that the filing was also requesting an emergency custody hearing, I am guessing that Amber and Andrew are either separated, or Andrew is just putting something in place in case they do separate. That is purely speculation, however.

We will continue to try to get the actual filing to see if there is more information about exactly what Andrew is seeking in terms of custody, etc. We will update as soon as we know more!

UPDATE – TMZ is reporting that “Amber Portwood’s boyfriend and baby daddy wants an emergency hearing to get sole custody of their child … according to new legal docs.”

UPDATE – Amber’s brother Shawn Portwood seemed to suggest that things are not as they seem with a mysterious tweet after the news broke about Adrew’s court filing. “Stay tuned for the surprise ending,” Shawn wrote. “Everything’s not always all it’s cracked up to be.”

UPDATE – Amber is now facing three felony charges after additional details are revealed from the night of the altercation, including Andrew’s allegations that Amber came at him and Jame with machete.

We have additional details from the incident that led to #TeenMomOG star @AmberLPortwood being arrested for domestic battery on July 5, including her and boyfriend Andrew Glennon admitting to police that she hit him with a shoe. https://t.co/7EMcCz2Dbm