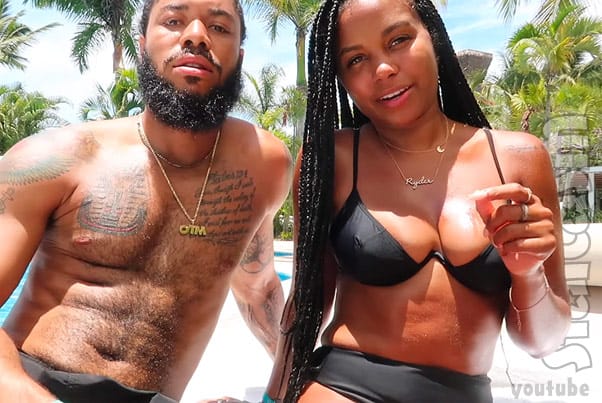 Teen Mom OG star Cheyenne Floyd is getting pretty serious with her new boyfriend Matt Walker, including a trip to Baltimore with her daughter Ryder to meet Matt’s family. The man-bunned rapper has won Cheyenne over, as well as Cheyenne’s ex Corey Wharton and Teen Mom OG viewers, but will their opinions change when they find out about Matt’s past arrests for domestic assault, theft, and burglary?

Radar Online broke the news earlier today that Matt, who raps under the name eMeX, was arrested for assault in Baltimore in 2011. Matt was booked after an altercation with his girlfriend in which he allegedly grabbed her and pushed her to the ground, causing “cuts to her face and nose.” We can exclusively reveal that Matt was also arrested again in 2014 and charged with theft, burglary and malicious destruction of property!

Radar obtained the police report from Matt’s assault arrest in 2011, when he was 19 years old. The officer indicates that he was responding to a call about a “woman screaming for help” on December 11. “She had an argument with her boyfriend in the car,” the report states. “She got out to walk away and he did not let her. Mr. Walker assaulted [victim] by pushing her on the ground. She had cuts to her face and nose. Mr. Walker was arrested.”

“I was trying to get away but he was trying to keep me there by getting in front of me and pushing me,” the alleged victim told the officer, “we ended up on the ground.” The report indicates that the victim was crying when police arrived, and that she later refused medical treatment for her injuries.

Matt was charged with misdemeanor second-degree assault. The case was initially filed in District Court, but Matt asked for a jury trial and the case was later moved to Circuit Court in June of 2012. On August 29, 2013, the case was closed with a disposition of nolle prosequi, which means that the prosecution opted to not move forward with the case.

Fast forward a few months and Matt was arrested in Baltimore yet again. On March 27, 2014, Matt was booked on four separate charges:

Malicious destruction of property – less than $1,000

Matt was bonded out the following day, and once again the prosecutors elected to not pursue the case. A disposition of nolle prosequi was entered on April 22, 2014 for the 2nd degree burglary charge, and the same disposition was entered for the remaining three charges on June 6, 2014.

We have not obtained the police report from the burglary and theft charges yet, so we do not have any specific details about the initial allegations. We’re also still working on obtaining mug shot photos from the arrests.

In a 2011 interview prior to his assault arrest, Matt talked about why he chose to be a rapper. In addition to revealing that a car accident sidelined his athletic career, Matt says that music was a good way to keep him out of trouble:

I started rapping sort of as a way to get away from my problems. Specifically at a time where sports were my life, when I got hit by a car, it put a halt to all of my hopes of a future in that field due to the mental block that my injury caused. On top of that, losing family members that had passed away, and even my parents being divorced, and much more… but it’s always been an outlet for me. I’d rather put my thoughts on paper than to have my actions lead to something I may regret.

Cheyenne and Matt are still together and going strong. The two took a vacation to Mexico together a couple months ago, and Cheyenne shared a couple videos from their trip on YouTube. Neither Cheyenne nor Matt have responded to the reports surfacing about his prior arrests.

Farrah Abraham has a ‘pregnancy scare’ but is ‘taking care of it’ – oh, and she’s flying planes now