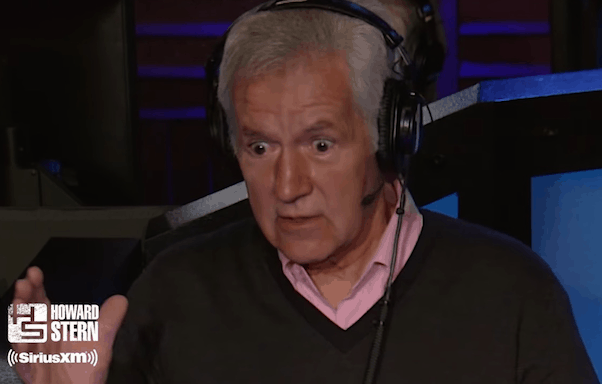 Tributes to and tales about the late, great Alex Trebek have been pouring in since the Jeopardy! host’s passing last week at age 80. There have been some great recollections of the man, whose show business career spanned seven decades. But if you haven’t yet heard the Alex Trebek pot brownies story, you’re in for a real treat.

The story came up in a tribute video The Howard Stern Show put together. The video is based on Trebek’s 2015 appearance on the show. And it features Trebek telling several interesting stories from throughout his life.

Howard’s lead-in to the story notes how Trebek’s professionalism hosting Jeopardy! was one of the reasons he became so beloved.

But Trebek’s “great sense of humor” came through in his 2015 appearance on The Howard Stern Show. Specifically, Howard brings up Trebek, whose final Jeopardy! episode will air on Christmas Day, telling him and co-host Robin Quivers about “the time he accidentally got high on hash brownies.”

Having done this once with rice krispie treats, I can empathize! But Alex Trebek consumed way more brownies than I think I ever have in one sitting — let alone pot brownies.

Howard’s full tribute to Alex Trebek is below. The brownie story starts at about 1:48:

“I went to a party at this home in Malibu,” Trebek begins. “And I didn’t know the people who were hosting the party. And they had hash brownies.

“I love chocolate,” Trebek explains, as Howard and Robin begin cracking up. “And I ate about four or five hash brownies.

“The party was on a Friday night,” Trebek continued. “I didn’t leave their home ’till Monday morning.”

“Is that really true?” Howard asked. “No exaggeration?”

“That’s no exaggeration,” Trebek said. “They put me to bed Friday night ’cause I was…almost comatose. And I did not wake up Saturday; I started to wake up Sunday. And then I went home.”

The whole video is an interesting watch for several reasons. I’ve never really seen footage of Alex Trebek other than on Jeopardy!; with Howard and Robin, he seems simultaneously more relaxed and just as “on” as when hosting his own show.

And Trebek’s pot brownies story also feels similar to the kinds of anecdotes he sometimes shared with Jeopardy! contestants during the short interview portion of the show.

Somehow, though, it’s hard to imagine the man bringing up his inadvertant weekend bender in front of his own audience.