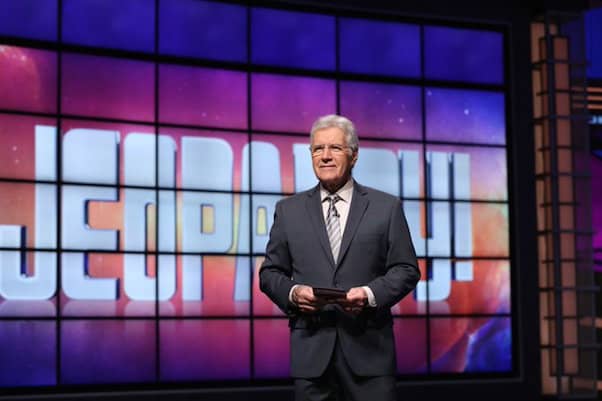 It’s the end of an era for the most popular American game show of all time. Jeopardy! host and pop culture icon Alex Trebek died this morning, after a two-year battle with pancreatic cancer.

The 80-year-old Trebek was immediately mourned by legions of fans — including the three biggest champions in Jeopardy! history.

The Jeopardy! host’s death was confirmed by the show’s official Twitter account just moments ago. The short note confirmed that Trebek, who hosted Jeopardy! for thirty-six years, did have a peaceful death.

“Jeopardy! is saddened to share that Alex Trebek passed away peacefully at home early this morning, surrounded by family and friends,” the message reads. It contains one more sentence: “Thank you, Alex.”

The family of Trebek, a relatively private man, has yet to offer any more details about his passing. In 1990, Trebek married his second wife, Jean Currivan. The couple have a daughter, Emily, and a son, Matthew.

(Trebek also has a second daughter, Nicky Callei, who was his first wife’s from a previous relationship; Trebek adopted Nicky after divorcing Elaine Callei in 1981.)

Though he suffered a first heart attack at age 67 and a second at 72, Alex Trebek’s health appeared to be relatively good through his late 70s.

But in March of 2019, Trebek announced he’d been diagnosed with pancreatic cancer, and that the cancer had already advanced to stage IV. Upon announcing the news, Trebek revealed that his prognosis was not good, but vowed to fight and to continue hosting Jeopardy! for as long as he could.

Just two months later, Trebek offered another update. He said his treatment had been going surprisingly well, and that some of his tumors had shrunk by a “mind-boggling” 50 percent.

Trebek offered several more updates in the ensuing months, letting fans know that his cancer had not gone into remission, but that he was still responding well to treatment.

But Trebek also shared that the likelihood of him surviving a second year with stage IV cancer was only seven percent.

“It was one of the great privileges of my life to spend time with this courageous man while he fought the battle of his life,” Holzhauer tweeted. “You will never be replaced in our hearts, Alex.”

Brad Rutter, who holds the record for most money won on Jeopardy! with $5.2 million, tweeted just one minute after Holzhauer. “Just gutted,” Rutter wrote. “There will never be another. RIP, Alex, and thank you so much for everything.”

And Jeopardy! The Greatest of All Time champion Ken Jennings, who also holds the record for longest Jeopardy! winning streak at 74 episodes, couldn’t even write a message at first. Jennings simply retweeted Jeopardy!‘s original tweet while gathering his thoughts.

Jennings then wrote a longer tribute:

Alex wasn’t just the best ever at what he did. He was also a lovely and deeply decent man, and I’m grateful for every minute I got to spend with him. Thinking today about his family and his Jeopardy! family—which, in a way, included millions of us.

Carrie Fisher dies after heart attack at the age of 60