Remember that “happy” picture of the Teen Mom OG cast we shared yesterday? Well, it looks like that truce was very short-lived, as Farrah Abraham started a fight with a couple of her co-network stars again.

The new incident actually began last week when a fan tweeted a photo of Farrah, Amber Portwood and Kailyn Lowry’s respective autobiographies. (The fan also mentioned she wants to get Catelynn Lowell and Tyler Baltierra’s new book, but didn’t include the cover in the picture.) 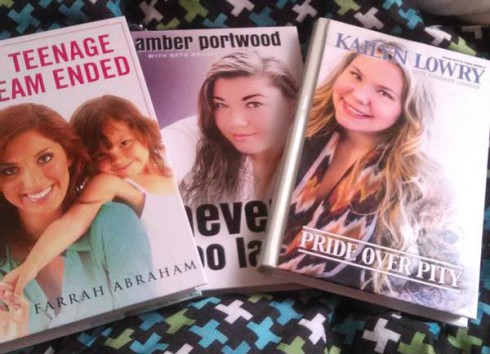 Farrah retweeted it and then followed up by something from 2013 about how she won an “Inspirational Literature” award for her book and by noting that Amber and Kailyn’s kids don’t appear on their covers.

Look@ covers as you collect them #ActionsSpeakLouder why aren't there more children on the covers #TrueStory @Mtv pic.twitter.com/u0OAdRBuAE

Understandably, the suggestion that they did something wrong because they didn’t include their children on the covers didn’t sit too well with Amber and Kailyn.

“What does this mean?????” Amber said in response to the tweet. She added, “I did it out of respect for my 6 year old who shouldn’t be on the cover of a book talking about drugs and sex..love not hate.”

After learning about the diss from other people tweeting at her, Kailyn seemed to get a kick out of Farrah’s logic.

I'm not a great mom because my sons are not on my book cover, everyone.

She concluded by saying the Teen Mom and Teen Mom 2 stars “are all on the same show trying to get across the same message” and “should be lifting each other up not tearing down.”

Considering how contentious Farrah’s return to Teen Mom already was, her tweet may not have been the best idea. I will say, though, she’s always good at stirring up the pot right around the time a new project is coming out…