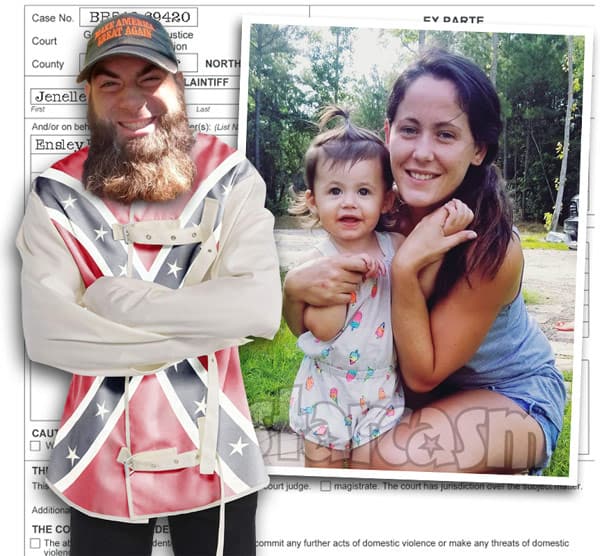 Teen Mom 2 star Jenelle Eason has filed a restraining order against her estranged husband David Eason which prevents him from contacting her or her children. As an added level of protection, Jenelle has reportedly left the state of North Carolina with Ensley and Kaiser and David does not know where she is.

@ustacouId explains that the delay on announcing the filing was partly because Jenelle was concerned about David posting things about her online. “She was waiting on this to go through and get granted so he couldn’t post any private pics of her without legal repercussions,” the account reveals.

In addition to concerns about David sharing negative things about Jenelle online, there was also an apparent concern for his daughter Maryssa — who is still living with him on The Land. One Twitter user asked if Maryssa was safe around David given his anger issues. “That’s why I waited,” @ustacouId replied. “Wanted her safe. She’s safe.”

The account later clarified: “I didn’t say she wasn’t on The Land anymore…all I’m saying is she’s safe. That’s all I want to say about her. That baby has been through enough.”

UPDATE – After this post was published, @ustacouId added another tidbit about JEnelle and David. “The night before she left they were fighting and he said he was ‘a god and she would never leave him’ he dared her to leave him,” reads the tweet. “Reminds me of the movie Bruce Almighty where he says ‘you can’t leave me..I’m the alpha baby’.”

The Ashley later confirmed that there was a restraining order filed by Jenelle against David. “The restraining order was granted because Jenelle was able to show proof [to the judge] that abuse had occurred,” The Ashley’s source reveals.

The Ashley’s source also confirms that Jenelle has left the state. “Jenelle is in hiding,” her source says. “She has no plans to return to The Land. She has left the state and does not plan to come back to North Carolina for her stuff or anything. The kids are with her.”

Radar Online previously reported that Jenelle fled to Tennessee, where she and the rest of the family were recently on vacation.

Prior to news breaking about the restraining, David took to Facebook to express his frustration over not knowing where Jenelle and Ensley are. “So since Jenelle has disappeared and I have no contact with her or Ensley, I have no option but to file a missing person’s report,” David wrote in a text graphic.

Radar Online spoke with a rep from Columbus County Emergency Services who confirmed that “David contacted authorities on November 5. The Columbus County Sheriff’s Office revealed a report had been made, but has not yet been filed.”

UPDATE – David responded to a comment about him calling the police department by stating that his call wasn’t about Jenelle and Ensley being missing, but his dog! “I contacted them because someone stole my dog yesterday you fu**ing a**holes,” he explained.

As we previously reported, Jenelle met with MTV execs in New York City a couple weeks ago to discuss the possibility of returning to Teen Mom 2. So far, there have been no reports of Jenelle filming again.

I assume this story is going to have some shocking twists and turns over the new few weeks, so stay tuned!