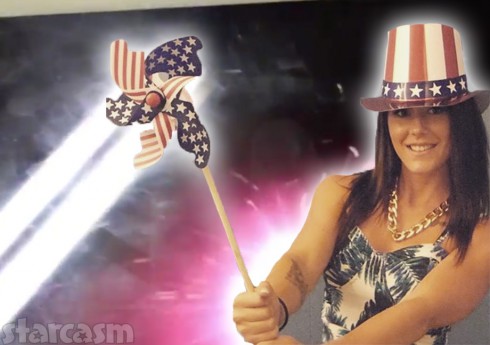 Defending herself to TMZ, Jenelle said she was just having “innocent” fun on the Fourth of July. She added Jax is totally fine and she wouldn’t hesitate to do the same thing next year. The website also reposted the video, in which she can be heard encouraging the pup to fetch.

After the controversy erupted on Saturday, Jenelle vowed on Twitter to never post “anything about my dog ever again.” But that didn’t stop the backlash from dying down — as evidenced by the death threat from one person she retweeted today.

In another attempt to defend her actions, Jenelle posted a classic America’s Funniest Home Videos clip of a dachshund running around with a lit Roman Candle.

She added, “Weiner Dog with Firework in mouth on the Fourth of July. Almost hurt people, but this is all funny to you guys.” She also said her dog is a “bada$$” who “went after every firework I was lighting off and knocking them over.” She said she told him to stop “numerous times.”

In an extended back-and-forth with one follower, she argued, “Why should kids be allows to hold sparklers? Why should dogs be allowed out if while camping and making fires for example?”

The other person responded that people keep dogs on leashes for those reasons, to which Jenelle said, “Ok well I’m sorry my dog was having fun and wanted to spend time with the family, if anything he was trying to protect us.”

This isn’t the first time Jenelle’s enraged animal lovers. During the last season of Teen Mom 2, she got extremely angry at Nathan Griffith’s dog, Moogan, and allowed him to roam the neighborhood unattended. The scene was so upsetting that MTV aired a PSA after the show about responsible pet ownership. In the PSA, Jenelle reflected, “It’s…very important for me to be a very good role model to my son, so instead of, you know, acting out like I did, I should’ve handled it a different way — not with so much anger.”

Despite her explanation and public apology, PETA later encouraged Jenelle to rehome her dogs. Among other things, the organization said, “Please understand that dogs are not toys or amusements or possessions just to have around.”

After being alerted to the new video on Sunday by Stevie Ryan, the PETA social media person said the information has been sent to their Cruelty Investigation Department.

PHOTOS Jenelle Evans and Nathan Griffith pictured together in underwear — are they back on?