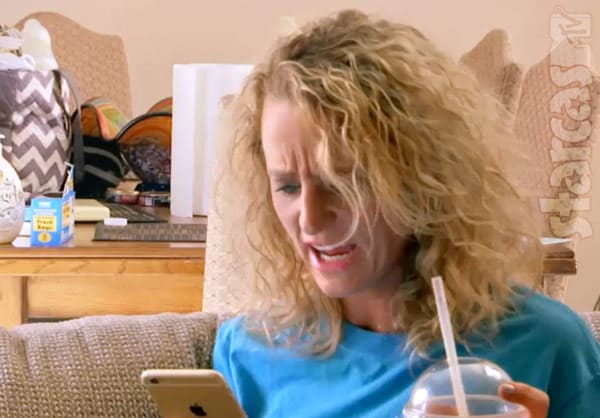 In this week’s batch of Teen Mom 2 preview clips we get to see the fallout from the video in which Ali claims Miranda won’t carry her backpack for her, Kail and Jo make amends while Kail and Javi continue to have issues, Jenelle has a scheduling conflict that might mean she misses an important event for Jace, and Aubree confronts Adam Lind about why he missed their father/daughter dance.

Aubree cheers on her dad at a weight lifting competition. After Adam receives his award (and accolades from Aubree), she confronts him about missing out on her father/daughter dance — as documented in last week’s episode. “Why didn’t you come to the father/daughter dance?” Aubree asks bluntly.

“‘Cause I had to do this,” says Adam, in reference to the weight lifting competition.

“My friends, they were all there,” Aubree points out.

“I’ll have to come to eat lunch with you one of these days,” Adam offers.

We did a little research and the timeline doesn’t seem to match up with what Adam tells Aubree. The scene above was shot on February 13, a day after the father/daughter dance on February 12. Judging from his Instagram account, Adam was hanging out at home with his daughter Paislee on February 12:

Popcorn during the day ?! Absolutely !

Leah talks with her friend Kayla about the video of her daughter Ali claiming that Miranda often makes her carry her own backpack. (Did you follow all that?) Leah says she discussed the video with Corey in hopes that the three of them can “work through it.”

At this point, Leah’s phone goes off and it’s a text from Miranda. Here’s what Leah reads from the message:

Hey, Corey was talking to me about y’all’s discussion about the girls. I rarely have her carry her own backpack, and if I do, it’s because I have to carry Remi in and other stuff.

I do care for them, and try to give them the best life when they are here, but it really bothers me that you are claiming you have some sort of sneaky video of me because I have absolutely nothing to hide.

Leah looks confused by the text message as she shifts her eyes back and forth and asks, “OK?”

In case you missed it, Miranda addressed the #backpackgate scandal this week in an interview with MTV. Click here to read what she had to say!

After Kail met up with Vee for lunch last week, she follows up with some tea on the back porch with her ex Jo. The two calmly discuss their volatile history together as both acknowledge it ebbs and flows dramatically from month to month. The topic of Javi comes up as Jo says he wishes Javi was more willing to participate in their discussions about Isaac and other issues. Kail then foreshadows her eventual split from Javi by revealing they are having some issues.

“Javi and I have been dealing with some stuff while he’s been deployed, and it’s been way harder than I ever anticipated,” Kail confesses. “So, it kind of makes me nervous for a lot of things, not just, you know, our situation: how Javi’s going to deal with us all being on good terms, but just everything in general.” 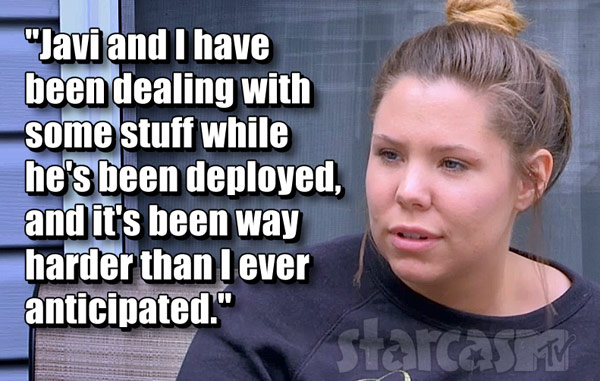 In case you missed it, Kail confirmed this week that she and Javi are getting a divorce.

Barbara, Jenelle, and David have a civil conversation about haircuts before Babs heads into dangerous territory by mentioning a big event coming up for Jace that Jenelle needs to be at. Babs reveals that Jace has a “soapbox derby tournament” on March 5 and that she won’t be able to attend because she will be in New Jersey with Jenelle’s sister. That date doesn’t jibe with Jenelle’s schedule.

“I have something planned that I’ve had planned for two months,” Jenelle points out.

“What?!” a frustrated Babs asks.

That marks the end of the “inside voices.”

SPOILER ALERT: Jenelle does wind up going to spring break, but in her defense, it was a paid appearance. Here she is on March 5 in South Padre Island:

SPOILER ALERT: Despite the absence of Jenelle, Jace apparently did pretty well at the Pinewood Derby!

UPDATE – Jenelle has responded to the preview clip with a tweet and some photos:

There's a new preview for next weeks #TeenMom2 , let me point out I did everything for Jace's derby I could do. pic.twitter.com/alucSyn47c

See all of these scenes and more when the new episode of Teen Mom 2 airs Monday night at 10/9c on MTV!

David Eason told Jenelle’s gay friend ‘I will blow your f***ing brains out’ and pistol whipped him, according to warrant