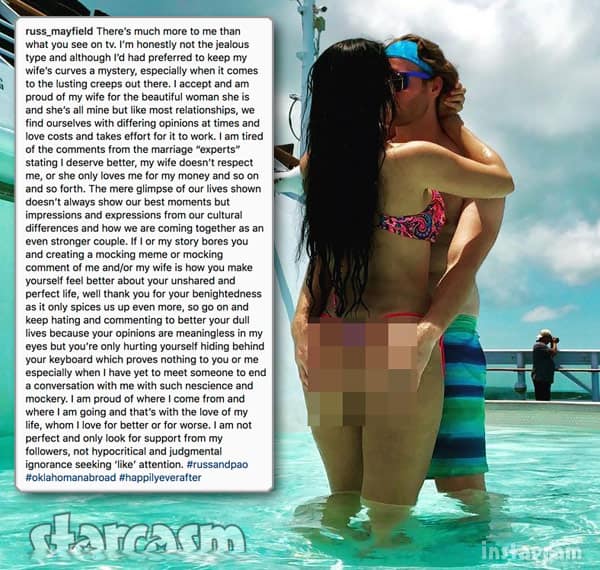 Just two days after 90 Day Fiance: Happily Ever After star Paola Mayfield shared a lengthy post addressing some of the most frequent criticisms she has received this season, her husband Russ Mayfield typed up his own circumlocutory diatribe castigating the naysayers. And I word it like that because I feel pressure to keep up with Russ’ intimidating verbosity!

Just like Pao, Russ opted to use a photo of her ca-rear end in a thong to deliver his message. In the photo — slightly altered above because it is “too sexy” for our advertisers — Russ can be seen kissing Pao as they both stand in the water, Pao’s booty almost completely exposed and held lovingly in Russ’ palms.

Russ begins his caption by pointing out that, unlike Pao, “There’s much more to me than what you see on tv.” He then talks a bit about his notoriously conservative approach to Pao’s modeling career, which has bee a major story line for the couple since they first appeared on 90 Day Fiance more than four years ago:

I’m honestly not the jealous type and although I’d had preferred to keep my wife’s curves a mystery, especially when it comes to the lusting creeps out there. I accept and am proud of my wife for the beautiful woman she is and she’s all mine but like most relationships, we find ourselves with differing opinions at times and love costs and takes effort for it to work.

Next, Russ responds to those who claim that he is too good for Pao:

I am tired of the comments from the marriage ‘experts’ stating I deserve better, my wife doesn’t respect me, or she only loves me for my money and so on and so forth,” he explains. “The mere glimpse of our lives shown doesn’t always show our best moments but impressions and expressions from our cultural differences and how we are coming together as an even stronger couple.

One of the audience’s biggest criticisms of Pao and Russ is that their story line seems a bit scripted and yawnish. This has resulted in numerous memes about the two, as well as Pao’s gay telenovela bestie Juan. But the newly aggressive Russ is not here for your memes — and it is at this point that he cracks open the thesaurus:

If I or my story bores you and creating a mocking meme or mocking comment of me and/or my wife is how you make yourself feel better about your unshared and perfect life, well thank you for your benightedness as it only spices us up even more, so go on and keep hating and commenting to better your dull lives because your opinions are meaningless in my eyes but you’re only hurting yourself hiding behind your keyboard which proves nothing to you or me especially when I have yet to meet someone to end a conversation with me with such nescience and mockery.

(That was one sentence y’all! I’m pretty sure it is the first sentence ever posted on Instagram using both “benightedness” and “nescience.”)

Russ reeled in his loquaciousness for a rather plain spoken conclusion. “I am proud of where I come from and where I am going and that’s with the love of my life, whom I love for better or for worse. I am not perfect and only look for support from my followers, not hypocritical and judgmental ignorance seeking ‘like’ attention.” Russ ended with a series of hashtags, among them #russandpao, #oklahomanabroad, and #happilyeverafter.

Speaking of the Russ and Pao (and Juan) memes: just before penning the message above, Russ went after one meme in particular, posted by @katie_not_holmes, who is also a moderator for the benighted r/90DayFiance subreddit. Here’s the photo, which advertises “Hire-A-Juan” for anyone out there looking to spice up a story line:

Russ tried to use the meme against itself with his retort:

Is your IG struggling? Do you want more followers? Misspell a country name and bash on others and you’re guaranteed 0% respect from those with a sense of dignity and common courtesy. Then follow @katie_not_holmes and get your fill of notsultation. #hatersgonnahate #aintersgonnaaint

As you might have guessed, that only made things worse. @katie_not_holmes was quick on the trigger with her responses: 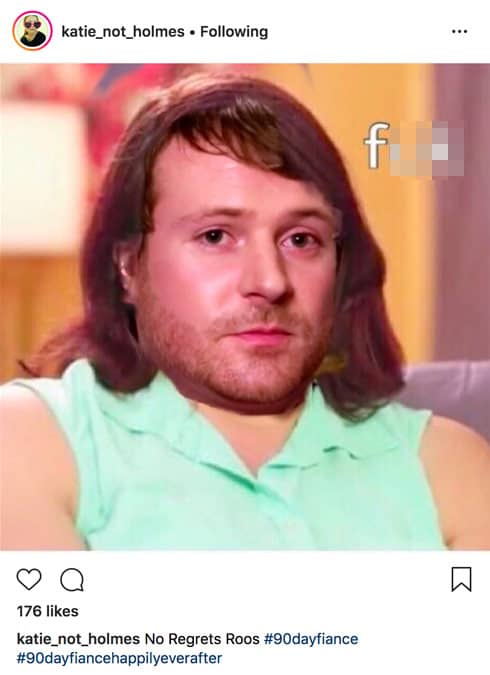 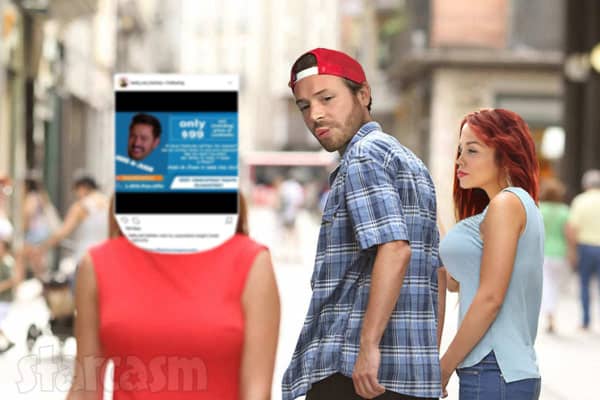 That WAS fun! Does that make me nescient?

In case you missed it, there will be a special 90 Day Fiance: Happily Ever After live after show Sunday night after the explosive new two-hour episode. It’s unclear if Russ and Pao will be tweeting along, but I sure plan to be!

HAPPILY EVER AFTER 1st photo of Nicole back in Morocco with Azan?