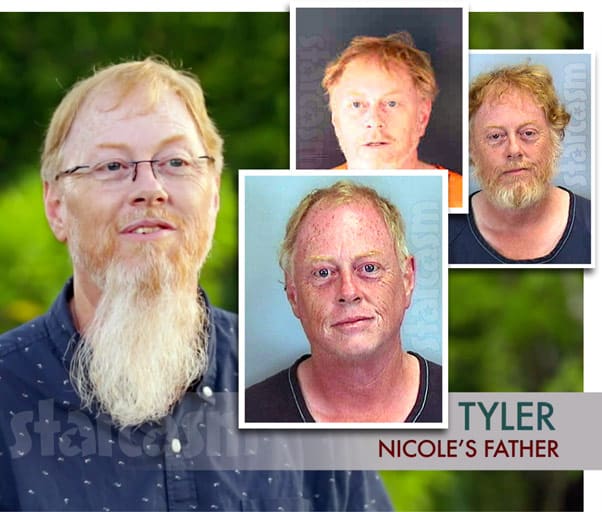 The father of 90 Day Fiance: Happily Ever After and Before the 90 Days star Nicole Nafziger is back in jail again in Florida. A beardless Tyler Nafziger was arrested and booked in Manatee County earlier today for theft.

According to jail records, Tyler looks to be facing two misdemeanor counts of petit theft of property valued over $100, but less than $750. The theft charge(s) is a first degree misdemeanor.

Given that the arrest happened so recently — and on a Sunday, there is not yet any additional information on the property that Tyler allegedly stole. I assume we will know more once the case is filed in court this week.

[NOTE: I’m seeing some reports online that Tyler was actually booked on Saturday. I’m not sure why there is a discrepancy, but online jail records indicate that he was arrested on Sunday. I’m looking into whether or not he was originally booked by another agency.]

UPDATE – We now have some of the court documents with details about the theft charges, and they paint a pretty sad picture.

Tyler’s theft arrest is the latest in a string of legal issues for the 52-year-old. He was booked in October of last year for battery and possession of drug paraphernalia after an altercation with a woman at a gas station. According to the police report, the alleged victim was a woman that Tyler had met just a couple days prior and he had “agreed to help her move out of her half way house.”

Tyler and the woman were at a Wawa gas station when they got into a heated argument. According to the victim, an eye witness, and surveillance video, Tyler placed the woman in a headlock at one point. “The victim stated she was able to breathe and was not in fear for her life however; she thought he was going to hurt her,” the report reads.

The eye witness told the officer on the scene that there was an argument, and that the woman tried to get in the passenger side of Tyler’s vehicle. That is when Tyler allegedly “grabbed the victim in a ‘headlock’ and pulled her out of the car. The witness stated as he walked up to the vehicle, the offender drove away.”

Police later tracked down Tyler and placed him under arrest. According to the arresting officer, Tyler admitted that he “grabbed her hand to get her out of the car” but insisted that “he did not choke her.”

Unfortunately for Tyler, his situation got worse after he “stated he had a glass pipe in his front right pocket.”

Tyler was booked again in January and charged with possession of Fentanyl and drug paraphernalia:

Cops conducted a traffic stop as Tyler was pulling into a residential driveway. While Tyler was speaking with a Deputy, another officer “observed in plain view a plastic bag that was tied with what appeared to be a white powder substance within.” The officer retrieved the bag and then conducted a search of the vehicle.

In addition to the bag with a white powder substance, police located two glass pipes in the front half of the vehicle.

Both Tyler and his passenger denied knowledge of the bag with Fentanyl. “Based on the totality of circumstances surrounding the incident, coupled with the fact the bag of Fentanyl was in open plain view and within arms reach of both Nafziger and [the passenger], I assert probable cause exists to charge both with Possession of Controlled Substance (Fentanyl),” the officer states in the report. “Nafziger is being charged with the two crack pipes as well.”

The police report doesn’t mention any other passengers and offers no explanation as to why Tyler was giving the man a ride in his back seat.

The Fentanyl and paraphernalia charges were bumped to drug court, and then back to criminal court. The next hearing is scheduled for May 5.

Of course, Tyler’s court dates are likely to be pushed back due to court closures in response to the coronavirus pandemic.

Speaking of the coronavirus pandemic, Tyler’s daughter Nicole Nafziger is still stranded in Morocco after flying there to see Azan Tefou in the middle of the COVID-19 outbreak last month. She has provided sporadic updates to her fans on Instagram, including several photos with Azan.

Here is her most recent that was posted on March 23, but was reportedly taken on March 14:

I never want to leave your side my love♥️

An “insider close to the 90 Day Fiancé alum” spoke with In Touch this week and says Nicole is “staying in touch” with her parents and daughter May.

“Nicole’s doing quite well, she’s fine,” the insider said. “May is being homeschooled by Nicole’s mom and step-dad right now…Of course, May’s missing her mom, and Nicole is missing her [daughter], as well.”