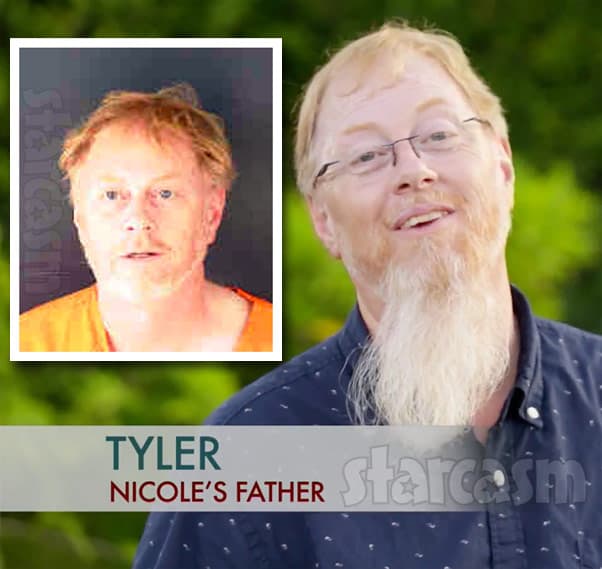 The father of 90 Day Fiance: Happily Ever After star Nicole Nafziger is back in jail in Florida after being arrested for possession of Fentanyl and drug paraphernalia.

Tyler Nafziger, who has appeared often on the show with his daughter Nicole, was arrested in Sarasota, Florida on Thursday. He is currently in custody facing charges of Possession of a Controlled Substance Without a Prescription (Fentanyl) and Drug Equipment Possession.

Cops conducted a traffic stop as Tyler was pulling into a residential driveway. While Tyler was speaking with a Deputy, another officer “observed in plain view a plastic bag that was tied with what appeared to be a white powder substance within.” The officer retrieved the bag and then conducted a search of the vehicle.

From the arrest report:

During my search of the vehicle two glass pipes with residue were located. One pipe was located in the center console and one was located in the pocket of the driver’s side door. These pipes were consistent with paraphernalia used to ingest cocaine.

Nafziger was read his Miranda Rights and agreed to speak with deputies. Nafziger advised that the crack pipes were his and that he uses crack cocaine. Nafziger stated on scene that he was not sure how the white powder substance got inside his vehicle. Nafziger stated that it might be cocaine, but was not sure.

Both Tyler and his passenger denied knowledge of the bag with Fentanyl. “Based on the totality of circumstances surrounding the incident, coupled with the fact the bag of Fentanyl was in open plain view and within arms reach of both Nafziger and [the passenger], I assert probable cause exists to charge both with Possession of Controlled Substance (Fentanyl),” the officer states in the report. “Nafziger is being charged with the two crack pipes as well.”

The police report doesn’t mention any other passengers and offers no explanation as to why Tyler was giving the man a ride in his back seat.

Tyler’s most recent arrest comes just a few months after he was booked for battery and crack pipe possession after an altercation with a female passenger that Tyler had recently helped move. The battery charge was later dropped, and Tyler was scheduled to appear in court for the crack pipe possession charge next week.

Both of Tyler’s arrests for crack pipe possession were the result of having them in his possession during unrelated incidents. Of course I strongly hope that Tyler will see this second arrest as a wake up call and that he will get help for his addiction issues. But, if he chooses to continue to use crack cocaine, I hope he has at least learned not to take his pipes with him everywhere he goes.

90 DAY FIANCE Larissa updates after arrest: ‘nobody was scratched or hurt’