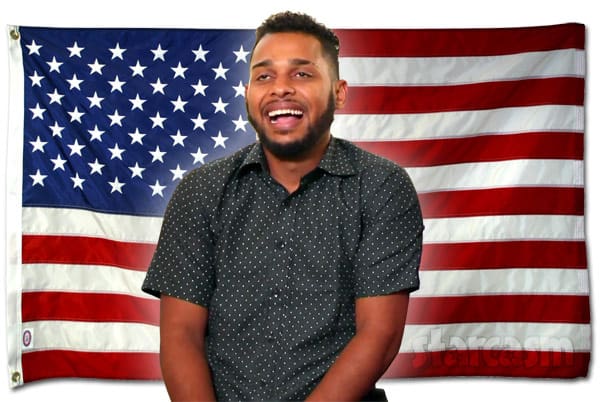 Less than two months after 90 Day Fiancé Luis Mendez posted a photo and indicated he had returned to his home country of The Dominican Republic, the 90 day divorcée shared a new photo and video on Instagram geo-tagged in Elizabeth, New Jersey!

In the photo, Luis can be seen strolling in a park that does look to be in the United States. “Working out with my bro @xelaju87…” Luis captioned the photo, referencing his brother, who lives in Elizabeth.

In the video, Luis can be see walking with his brother as he asks hims “What’s up?” Luis’ brother replies: “Not much bro.” Here is the photo and the video — notice that Luis also tagged his fellow Dominican 90 Day Fiance: Happily Ever After star Pedro in the caption:

And it seems that Luis has been in America for almost a month because he posted a photo with the same brother on August 4:

That photo didn’t make many waves in the 90 Day Fianceverse because it was not geo-tagged in the US.

In addition to the Instagram photos and video posted by Luis, there is also a photo circulating online that was reportedly taken recently and shows Luis in Times Square in New York.

Luis’ potential return to the US has caused a bit of confusion for some fans, who were under the impression that he had been deported. That impression was created thanks to the photo and caption posted by Luis back in July in which he stated that he had been in The Dominican Republic for a week. There was ZERO evidence to suggest Luis had been officially deported, although many (including myself) assumed that if he had returned to his home country by choice, that probably meant he did not intend to come back to the United States.

I should point out that the @90DayFianceTea Instagram account makes a bold claim that Luis never actually returned to The Dominican Republic at all! In the account’s stream they wrote: “FYI: Luis never left, he was trolling and Molly knows he’s in America.” I’m unsure of the validity of that claim, but it seems completely feasible.

Meanwhile, in the comments section of Luis’ most recent post, his Happily Ever After co-star David Toborowsky chimed in with some positive vibes. “Looking good @luisemmanuel91,” he wrote, adding: “when are you coming to see us?”

Luis replied: “Hey brother I hope soon I really want to hangout with you guys.”

Sounds like a date! (David and Annie better start getting rid of any and all owls in their apartment now.)