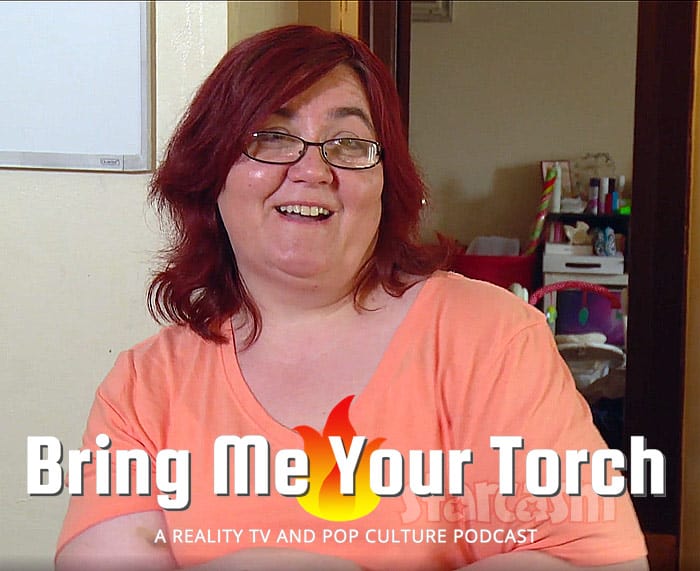 Sunday night was the final episode of the inaugural season of 90 Day Fiance: Happily Ever After? (aka The Danielle and Mohamed Show), but before the episode aired, Danielle appeared on the Bring Me Your Torch podcast to update fans on how things are going since the Reunion taping plus fill in some details about questions raised on the show this season.

Here is the full podcast, followed by some transcribed highlights. (As I mentioned, the podcast was recorded prior to the Reunion Part 2 airing, so the hosts were not able to address topics that came up on that final episode. They did address Part 1 however!)

The conversation kicks off with co-host Jesse asking Danielle how she’s been doing since the Reunion taping. “I’m doing better now. I am,” Danielle says. “It has been rough with everything that’s been going on, but I’ve managed to get through it with the support of my family and friends.”

Danielle is asked to clarify the timeline of events a little as far as Mohamed moving out and then tracking him down in Florida. She reveals that Mohamed moved out of their house in Ohio back on December 18 of 2015 and her “American police” inducing encounter with Mohamed in Miami happened in May of this year.

Bring Me Your Torch co-host Elaine reveals herself to be a true fan of the show when she can’t resist asking an obvious question about Mohamed’s gal pal Luisa. “So was Luisa just crazy or did she just want to get on camera?”

That was followed by this conversation about all of the supposed sacrifices Mohamed made to join Danielle here in America:

JESSE: We also heard Mohamed say that his excuses why he should be able to stay in America was that he gave up a lot for you, he came to this country, he left his friends behind, yada, yada, yada… Well, if that was all such a big deal, when you guys broke up, why didn’t he just move back home? It seems like he wants to stay in America for somebody who claims to have given up so much back home.

DANIELLE: Yes, I agree, because he’s always said that he would go back home if we ever split up, but now he has a change of tune that he wants to stay here. And I even said that to him once: “If you’re so unhappy Mohamed then go back home to where your family is and your friends are.”

ELAINE: Yeah, but in the after show he said he never once considered coming to America before meeting you. But that’s obviously a lie because he was on the website. So he clearly wanted to meet somebody from a different country — and obviously America.

The hosts then ask Danielle about Mohamed’s family and friends back in Tunisia and how much they know about Mohamed’s “celebrity stature” here in America. “I don’t think they do know the extent because he has, like, two different personal pages and one is for his family and friends that are back home, and then the other one is for everyone else,” Danielle says. “I have a couple of his family members on my page, but they don’t really want to get involved with the situation,” she adds.

Danielle is asked at what point she was able to finally be done with Mohamed and kick him to the curb after giving him so many chances for so long. “After Miami. After I went to Miami and the way he treated me there, and ended up calling the cops again — that did it.” [Danielle later revealed that her friend Beth had talked with Mohamed not long after he married Danielle, and she told him about the clause allowing green card spouses to get out of a relationship without being deported if they have been abused. Danielle believes that’s when all of the calls to the police began as an effort to start documenting a pattern of abuse.]

Danielle explains that she had more than romantic reasons to want to stay in touch with Mohamed. “The thing is, no one understands why I’ve done the things I have because technically me and the co-sponsor are responsible for him for the next ten years [or] as long as he’s in the States if he would collect government assistance,” she points out. “And that’s a big deal! Because the government could come back on me and the co-sponsor. And why, even if we’re not together, I still wanted to be involved in his life, because that’s a big deal!”

The conversation then turns to some of the sex talk brought up at the reunion. “This is kind of a tough question, and I apologize in advance,” co-host Elaine begins, “but it came up on the after show. Mohamed made claims that you locked him in rooms and screamed that you wanted your sex. Is there any truth to this, or is it [a] complete lie? I mean, is it a half truth?”

“Half truth,” Danielle admits, “because I — he’s not telling the part where I was three feet from the door and he could get out of the door. And it wouldn’t make sense [because] the lock is on the inside of the door, not on the outside of the door.”

“But you did scream that you wanted sex?”

“No, I never screamed that I wanted sex!”

Jesse draws a comparison between Danielle’s relationship with Mohamed to that of Nicole and Azan (from Morocco) on the current season of 90 Day Fiance. He asks Danielle if she has any advice for Nicole.

“Yes, I’ve actually talked to Nicole, and I’ve talked to Azan too,” Danielle reveals. “I told Azan I recognized the stuff he was complaining to Nicole about, about the no kissing and stuff in public because I wasn’t allowed to do that when I went to see Mohamed. So I could understand where he was coming from because a lot of the countries over there, they don’t like that stuff out in public — it’s behind closed doors. So, I understand that and I told Nicole to take her time and don’t rush and to go back another time — maybe two times — before she does paperwork to make sure everything’s legit. And then I told Azan, ‘If you do come over, don’t let the fame get to you from being on the show.'”

So where are Danielle and Mohamed at now in their relationship? Danielle says she no longer speaks to Mohamed and the next time they talk will most likely be in court. She says Mohamed has tried reaching out to her, more than likely because he is scared by the fact that she refiled for an annulment, but she has not responded.

Speaking of not responding, when Danielle is asked when the court date is, she says she and her attorney are waiting for Mohamed to get served and for him to respond. “Once he responds, then they’ll issue a court date,” she explains.

Elaine knows Mohamed well and asks, “So what if he never responds?”

“Then I have several different options,” Danielle says. “Well, if he [doesn’t] respond, then they will just go ahead and set a court date. But, the issue is that he has to be served. So they sent a certified letter out for the first attempt, to get him served. And then if that [doesn’t] work, then we’re going to send papers down for the sheriff to deliver to him. And then if that [doesn’t] work, then I can do a posting in the newspaper as the last resort.”

Essentially it sounds like yet another episode of Tunisian Where’s Waldo! (Let’s hope those TLC cameras are rolling!) 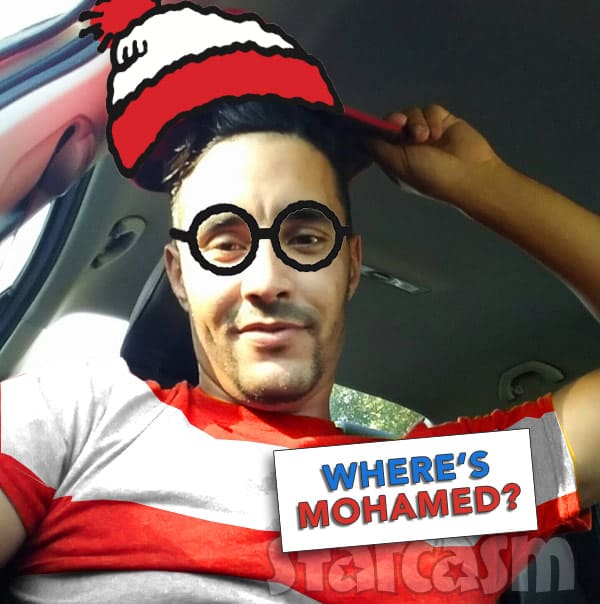 So is there anything brewing with the feller Gabe that we saw Danielle go on a sort of date with this season? Nope. Danielle says they were always just friends and that the scene was something cooked up by show producers. “The show wanted to have me film with someone that was of the opposite sex, so they got Gabe to film with me,” she reveals. “Other than that we’re just friends.” Gabe was going through a separation from his wife at the time and Danielle says his wife reached out to her at one point, but she had to block her because “it was just too much drama.”

Danielle is asked if she has any parting words for listeners, which may or may not include Mohamed. “I want to say that I have been moving forward in my life,” Danielle asserts. “I’ve been accepted to college. I’m going to start in college in January. I’m going for RN.” She adds, “I’ve always wanted to be a nurse, so now I’m going to do it.”

Danielle had previously revealed her college plans on Twitter, and even included her acceptance letter: 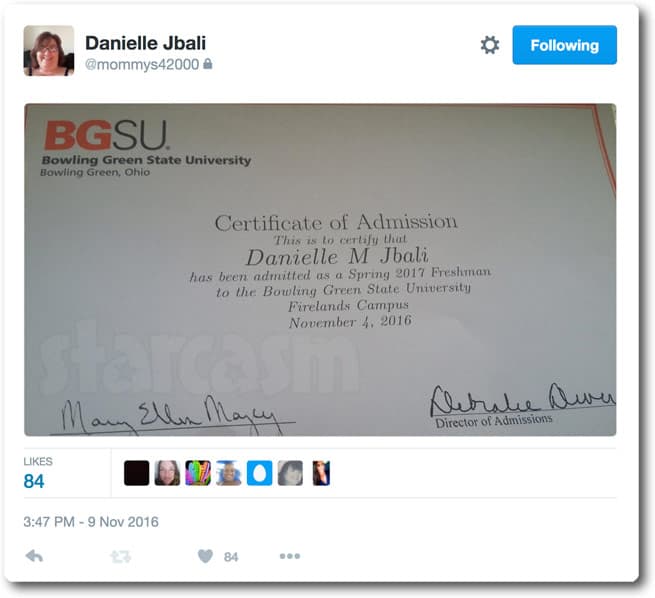 Congratulations to Danielle! It’s so great to see that she seems to be getting her life back on track after having it completely (and very publicly) derailed by her affection for Mohamed — who it seems never felt the same about her. We wish Danielle the best and REALLY hope we will be able to continue following her journey (and Mohamed’s) in future episodes of whatever show TLC can come up with to get us our DanMo fix. 🙂