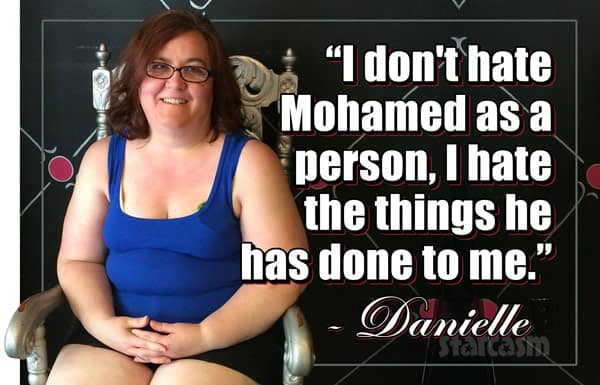 Breakout 90 Day Fiance superstar Danielle Jbali recently returned to TLC as part of their 90 Day Fiance: What Now? series, and her return has fans hitting up Danielle on “soshull meedya” with tons of questions — many of which Danielle has answered numerous times before. In hopes of clearing up the most frequently asked questions once and for all, Danielle shared a lengthy post on Facebook in which she talked about her reasons for keeping Mohamed’s last name, what happened with her friend Nelson in Maryland, and that “feminine hygiene issue” that Mohamed talked about.

Danielle’s original post was one lengthy entry, so I’ll break it down for you here by subject:

I am writing this statement to address some things, viewers of the show have been asking and this is the last time I will address these topics.

HOW DOES SHE FEEL ABOUT MOHAMED NOW?

One of the first things I want to address is that I don’t hate Mohamed as a person, I hate the things he has done to me. When you are fighting and emotional you say things you later regret. I am at peace with all my decisions and I am living my life. Mohamed will have to face his judgement when he dies and has to answer to Allah.

WHY DOES DANIELLE STILL USE MOHAMED’S LAST NAME JBALI?

The second thing I want to address and this is the last time I will answer this about my last name. I made the decision to keep my married name because right now it is not important to me to change it. Just because I kept it does not mean I want Mohamed, love him, want to remain relevant or obessed with him. I made my decision on finances and time. It costs money with documents to change it. All of the documents that costs money are my drivers license, school ID, passport, STNA license and home and car titles. You have to have the time to go to all those places such as social security, banks, utilities, insurance, loans and so much more. My time is invested into my kids, grandkids, family, friends, school and work. When I am not working or hanging with loved ones I am working on school stuff.

The third thing I want to address is when Mohamed said I needed to see a doctor for hygiene issues and a medical condition. I am in the medical field and I take a shower everyday because in this line of work you don’t know what you can bring home on your clothes or uniform. I wash clients up and take care of them and their needs. First I have found out within the past year that it was started by a fan who befriended Mohamed and I both. I had let her into my Facebook because I thought she was a true friend but later on found out after the fact she was not. She took screenshots of private conversations and passed them around. Mohamed also knows about the time he said these things, I was having issues with my periods and eventually had a biopsy that he took me to and later on, I had a surgical procedure done that my daughters were there for me.

WHAT HAPPENED WITH NELSON ON THE WHAT NOW? EPISODE

The last thing I want to address is the What Now episodes where I drove to Maryland to meet a guy named Nelson. First of all, I have friends in Maryland that I go see every so often, I see these friends on particular trips also, and Maryland is like my second home. Nelson and I started talking last summer for several months and one of my trips to Maryland I actually met up with him for 30 minutes and we had agreed next time I came back we would go out on a date. The next time on my way to Maryland, I had texted Nelson to let him know I was on my way and he wanted to come to my hotel room at 2am when I arrived after being up since 6am and driving six hours and I told him no, he can wait till our next date on Sunday. He got mad because I would not let him come to my hotel room and stood me up.

I am happy in my life and living my life for me and not fans of the show. I am in college getting ready to finish my classes and starting my fall classes the end of August. I work with mentally handicapped adults and I have a second job as a home health aide. My daughters are all doing very well. My oldest daughter attends college and works. My middle daughter is starting her senior year of high school and working. My youngest daughter will be a junior in high school. They have friends and boyfriends and most of the time their friends and boyfriends are at our house. My son is engaged to the mother of his children and they are excepting another baby in October.

I never claimed to be perfect and I am still learning in this life.

I have to really hand it to Danielle — she seems to have come SUCH a long way since she first appeared on 90 Day Fiance. And I mean that as far as handling herself online as well as improving herself and her life in general.

If you have a question about Danielle that she didn’t answer above, there is a good chance she’s addressed it before. Here are some links to previous Starcasm articles that include Danielle tackling all sorts of topics ranging from her arrest for fraudulent checks to whether or not she regrets doing the show:

What happened to the reported makeover show that Danielle was supposed to be on?

Was Danielle Jbali arrested? What for? 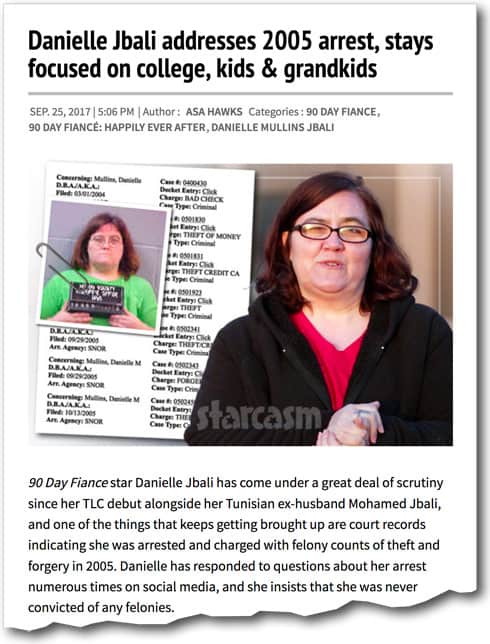 If she had it to do over, would Danielle choose to be on 90 Day Fiance? (Plus LOTS more questions and answers with fans)

Did Danielle really announce that she was pregnant on Facebook?

How many times did Danielle and Mohamed call the police on each other?

Was Moohamed affectionate with Danielle early on in their relationship, before he came to the US and appeared on the show?

Bring Me Your Torch podcast interview with Danielle

90 Day Fiance Corey and Evelin actual wedding photos & date; she says it was for his visa