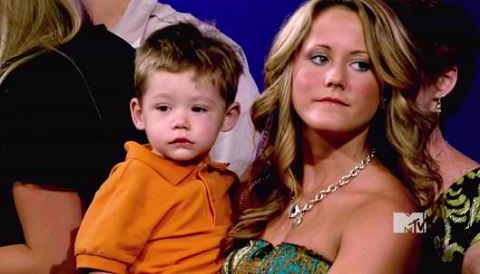 Jenelle Evans had one heck of a weekend. After getting into a fight with her fiancé, Gary Head, police were called leading to both of their arrests. Evans and Head were both charged with assault and drug possession. This Teen Mom 2 star’s chances at getting custody of her young son back from her mother aren’t looking good — or are they?

Even though Evans’ charges are quite serious, they won’t affect her standing with her son — fortunately for her. “He is not going to be taken away from her,” a certified law specialist told Hollywood Life. “She won’t automatically lose her kid.”

Evans had recently been trying to get full custody of her son back from her mother. She got off of probation in April and since then has steered clear of trouble — until this weekend. Her drama-filled relationship with Gary Head has hit an all time low and even though Jace is still very young, he may still be negatively impacted by it all.

“Stress in the life as a small child can have a detrimental influence on their emotional and even intellectual growth. Too much production of stress hormones can interfere with a child’s ability to concentrate and pay attention and learn new things. It also makes them uneasy and anxious,” a child psychologist and parenting expert says regarding Evans’ son, Jace.

Jenelle Evans was charged with possession of drug paraphernalia, possession of marijuana up to 1/2 oz., simple assault, and simple possession of schedule IV controlled substance — which was reportedly Klonopin.

This single incident aside, Jenelle will definitely have to make some major life changes if she does ever want to have full custody of Jace, but thankfully for her, that door doesn’t appear to be completely closed in the future.