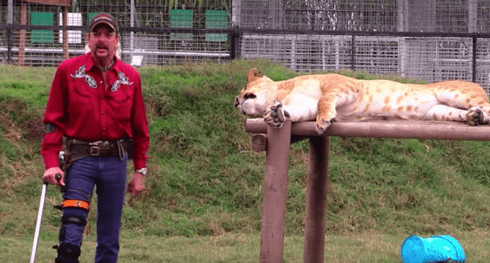 One of the plethora of things viewers of Netflix’s blockbuster documentary series Tiger King wonder about is why Joe Exotic wears a leg brace and a uses a cane in some of the footage. Searching the Internet can lead to more confusion as there is a false assumption circulating online that Joe was injured in a tiger attack caught on camera. The video footage for that tiger attack isn’t real, it was filmed as an instructional video for workers at the G.W. Zoo. Furthermore, the leg injured in the staged video is the opposite one that he seems to have problems with. What really happened with Joe Exotic’s injured leg?

The real reason for Joe’s leg troubles goes back to when he was a young man. On the very first episode of the series, Joe recounts that he drove off a bridge after his father found out he was gay and asked him not to attend his funeral.

Joe survived the wreck, but he broke his back and had a long recovery. He moved to Florida to receive physical therapy, and met a neighbor who ran a safari. His neighbor brought home baby animals to care for, and Joe says that this is the origin story for his love of exotic animals.

“At the age of 13 I knew I was gay. I had a bad time struggling with it. When my father found out he made me shake his hand in front of my mom and promise not to come to his funeral.

So, I had a real issue dealing with that and one night I drove my car off a bridge.

I broke my back and spent five years in braces. I went to Florida to do my therapy and my neighbor was the manager of Lion Country Safari and he brought home all the baby lions and baby monkeys and stuff at night to bottle feed. And that’s where my attraction to exotic animals really started in.

I know that they have a heart and a soul and a mind. I’ve learned from them and they do therapy for me. But the animal rights people, they keep sayin’ I can’t have these tigers.”

In 2018, before the Oklahoma gubernatorial candidate was arrested for 19 federal charges, Joe suffered another car accident that compromised his health. According to Oklahoma’s News 4, Joe failed to “yield from a stop sign and was struck by a westbound pickup truck” driven by a 73-year-old man.

Joe sustained “head,internal and external injuries, and leg trauma,” according to the news site.

His husband Dillon posted a picture of Joe on Facebook with this message: “We appreciate all of your concerns and prayers. Joe is doing fine, he’s pretty banged up but we will make it through this. Joe says thank you to everyone and that he is still very much alive.” They also set up a now-defunct GoFundMe page to help cover medical costs.

While the vicious tiger attack to his leg wasn’t real, Joe did almost get injured by one of his ligers in a major scene of the Tiger King series. He suspected foul play because that day the big cat was very interested in his shoes. Someone could have sprayed his shows with a scent that made the liger, who otherwise was pretty docile around Joe, to turn aggressive towards him. At once point the cat starts dragging Joe around by his shoe and the zookeeper is in real danger. He shouts expletives and shoots the gun that’s ever-present on his hip to scare the cat so he could escape to safety.

TIGER KING What did Jeff Lower do before he took over G.W. Zoo?

TIGER KING What did Jeff Lowe do before he took over G.W. Zoo? Grandpa’s circus, fraud conviction, Prince lawsuit, Evel Knievel and more!