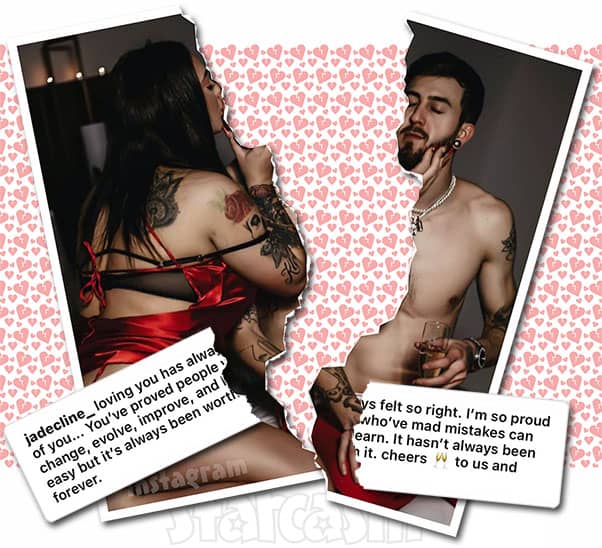 Jade’s break up announcement was made via Instagram during a Q&A session with her followers after someone claimed to have spotted Sean on Tinder.

QUESTION: Are you and Sean broken up? Because I saw him on Tinder earlier 👀 I hope so girl. You deserve better.

JADE: I’M SCREAMINGGGGG 🤣😂🤣😂 They can have him lmaoooo.

Another follower asked: “Are you single?” Jade replied: “Yasss 🤪”

If you are heading to Tinder in hopes of getting matched up with Sean, here’s a screen cap of what to look for:

Jade has once again scrubbed Sean from her Instagram profile, including her racy, lacy boudoir photos taken just last month.

Unfortunately for Jade, the break up looks to have happened just before Sean inevitably takes the hip hop world by storm as rapper/producer SvnSxx. Here’s a little sneak peek of Sean’s studio:

I’m assuming that Sean’s studio is/was probably in Jade’s basement, so I’m not sure how the break up will impact his music career.

In addition to breaking up with Sean yet again, Jade revealed that she and her mother, Christy, are back on the outs as well. “Do you and your mom have a better relationship?” a follower asked. “I don’t have a relationship with her,” Jade replied.

It certainly sounds like Jade will continue to bring LOTS of drama when the new season of Teen Mom 2 premieres on May 4!

Until then, feel free to take a trip down memory lane with some of Jade and Sean’s previous break ups and reconciliations over the years…

#TeenMom #YoungAndPregnant stars @jade_desere and Sean Austin look to be back together as they were photographed kissing while together at a restaurant this week! https://t.co/gkkzwmGDr4 New season begins on Monday at 10/9c on @MTV!

#TeenMom #YoungAndPregnant star @jade_desere announces her family is opening a restaurant! Plus, she reveals that she and Sean are talking about having a 2nd child "because he really wants a son and wants our kids close in age." https://t.co/6As59NqzBQ

#TeenMom #YoungAndPregnant Jade Cline confirms she and Sean Austin have broken up again. Plus, get an update on the restaurant that Jade and her family were planning on opening in Indiana! https://t.co/BYMVgWScDb

[Apparent break up we didn’t do a post about.]

#TeenMom2 Jade & Sean exchange social media PDA, hinting that they may be back together. Unfortunately, just like many of her scenes on TV, Jade's positive mood quickly evaporates as she begins arguing and cursing angrily with folks over…geometry?! 🤬📐 https://t.co/qQJka4Dvjf

#TeenMom2 Jade & Sean are back together again – and may have gotten married?! Get all caught up, including Jade's racy post-BBL boidoir pics & results of our marriage records search! [NOTE: Original photo altered to include @KristoferHorse & @lilfootx_box] https://t.co/0G7hnREX1W pic.twitter.com/Ke41ucVnWq