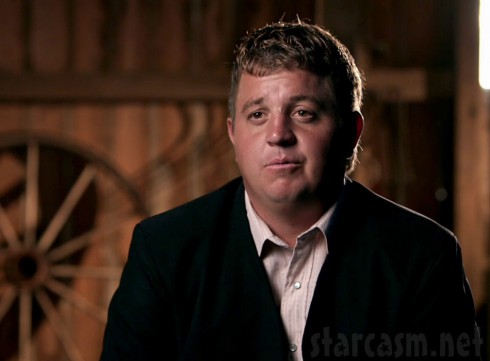 Discovery’s “reality” series Amish Mafia premiered Wednesday night to a whopping 3.643 million viewers, following in the footsteps of their sister network TLC’s very successful Breaking Amish series this fall. The numbers are especially jaw-dropping considering the network aired a “sneak peek” of the premiere episode on Tuesday night and had 3.411 million viewers for that! 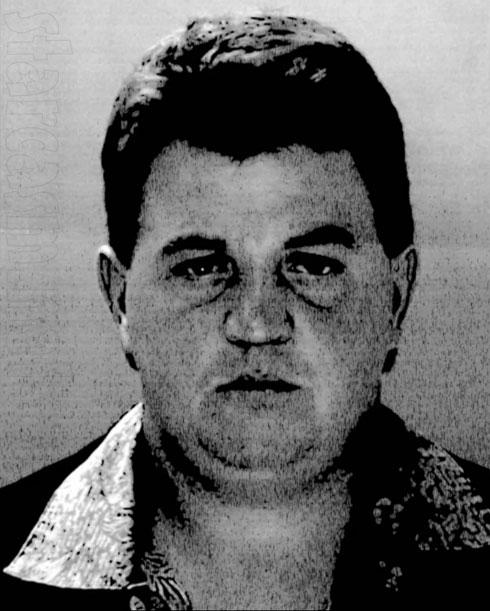 The show centers around the Tony Sopranoesque “Lebanon” Levi (mug shot above), who heads up a gang of enforcers that supposedly takes care of the dirty tasks the Amish community leaders are unwilling to do themselves. From the Discovery press release:

Lebanon Levi is the Amish insider who holds the power and serves as protector of the community for a price. He exists above the law and occupies the role of police, judge and jury. Levi’s team engages in a life outside of Amish and non-Amish community codes as he quietly exerts his influence and control. Levi’s brand of order is precise as he seeks to keep outside forces from infiltrating the Amish community, while keeping the principles and morality within the community in check. 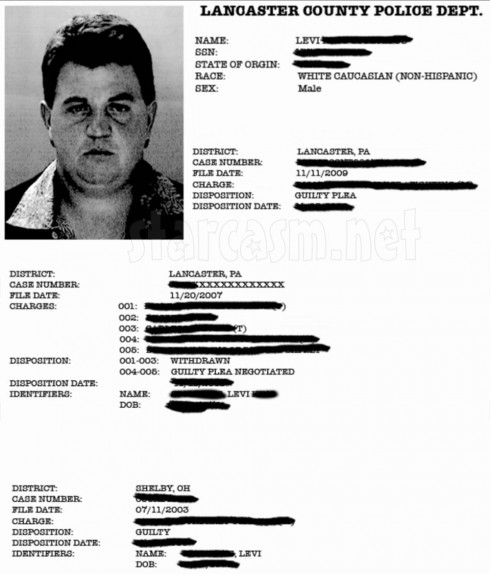 So who is Lebanon Levi? During the premiere Discovery flashed a rap sheet for him (above – click to enlarge) that included a mug shot as well as some arrest records with all the pertinent information (his real name, what he was charged with, his social security number) blacked out. But it took very little skill in Photoshop to find out the name on the rap sheet is Levi King Stoltzfus. An online search of court records turns up quite a criminal history for ol’ Lebanon Levi Stoltzfus, but it’s not exactly what you would expect: 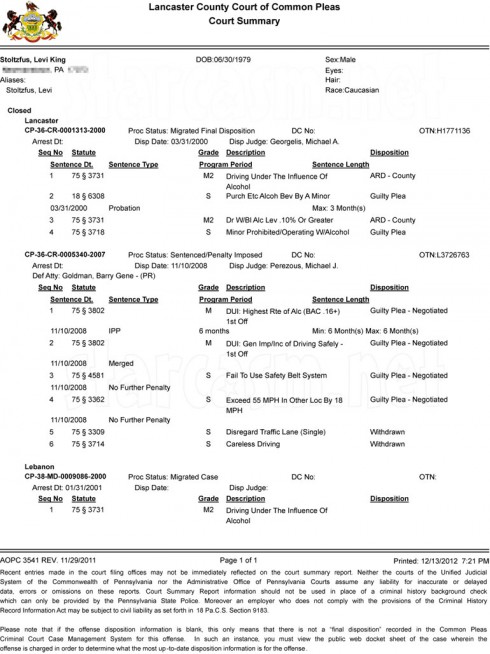 Instead of charges for weapons possession, assault, or racketeering, what we find is that Levi apparently likes two things: Booze and driving. And sadly, he likes to do them at the same time. He has multiple DUI arrests from 2000, and 2007, the earlier of which included charges associated with underage drinking because Levi was only 20 years old at the time.

Oddly (or perhaps not so oddly), the online records and those edited and shown by Discovery don’t seem to match up. I’m not sure if that means they altered them slightly to throw people off, or if Levi just has that many more arrests. Curiously, the rap sheet shown on Amish Mafia includes an arrest (and guilty verdict) for an offense in Shelby, Ohio as well. Also, I haven’t had much luck turning up a mug shot either. (There’s no guarantee the one shared by Discovery is “real”) Are there any legal eagle sleuths out there who want to help us uncover Lebanon Levi’s criminal past? Comment below or drop us a line at starcasmtips(at)yahoo.com!

UPDATE – We received some tips that helped uncover some more information about Levi! There was a separate arrest listed in online court records that I missed the first time around. It is an arrest for “Disorderly Conduct Engage In Fighting” that occurred on November 8, 2009. The case was filed on 11/11/2009, which matches up with the rap sheet provided by Discovery. (Finally, a “mafia-esque” charge!)

So here is the timeline of Lebanon Levi’s arrests cobbled together from the Discovery rap sheet and online records:

For these offenses it appears as though Levi entered the Pennsylvania Accelerated Rehabilitative Disposition Program (which allows first-time offenders to avoid jail time or losing their licenses) and served community service.

July 11, 2003 – Levi Stoltzfus arrested in Shelby, Ohio (or maybe Shelby County, Ohio?) for an unknown offense. He pleaded guilty according to the Discovery rap sheet.

September 9, 2007 – Levi Stoltzfus arrested in Lancaster County for DUI and other traffic offenses, including not wearing a seatbelt and going 73mph in a 55mph zone. He was charged with:

The last two charges of disregarding traffic lanes and careless driving were withdrawn and Levi entered a guilty plea on the other charges. Here is what it says his sentence was for the other offenses:

November 8, 2009 – This is the same date as above so I assume it is a different charge from the same incident:

Levi entered a guilty plea for both charges and the only thing in way of punishment that I could fine is that he was ordered to pay $310 total in fines and court fees.

On a completely unrelated note, Levi is apparently a volunteer fireman for the Neptune Fire Company in Richland, Pennsylvania. On their website he is listed as both a Trustee (under “Administration”) and a firefighter. Under his “About me” Levi says his nickname is “Boova” and his favorite quote is “Onnnn PURPOSE.”

I couldn’t find any photos clearly of Lebanon Levi, but his pals commented on his absence on a group photo posted to Facebook. “Where’s Levi? ‘got any amish in ya, no, want some?” hahah,” one guy quipped. “His horse was in the shop,” another responded.

I did dig up this picture, though, with a Neptune Fire Company fireman that does look a lot Levi. (That’s good enough for blogging right?) It’s from a few years ago: 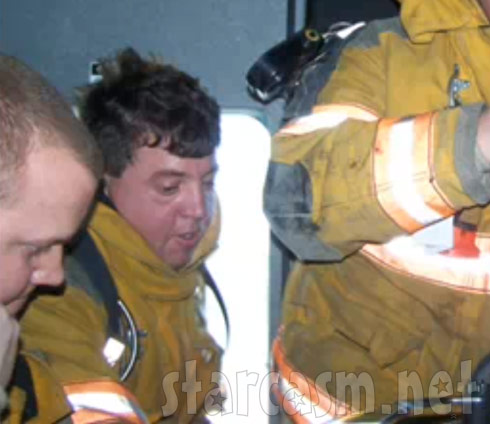 Here’s a little blurb from a local news station mentioning Levi asking for permission to set fire to a mobile home so Discovery could film it:

In unrelated business, council gave approval for Neptune Fire Co. member Levi Stoltzfus to set a mobile home on fire at the Richland carnival grounds under the condition that prior proof of liability insurance is provided to the borough office.

Stoltzfus said a crew will film him combating a fire in the trailer for the purpose of a creating a segment for a Discovery Channel program. He told council the trailer will then be set ablaze again for fire department training.

Landes told Stoltzfus to notify residents living near the carnival grounds in advance of the scheduled burn.

So perhaps we will see Levi “reenact” a scene this season in which he sets a person’s mobile home on fire! LOL!