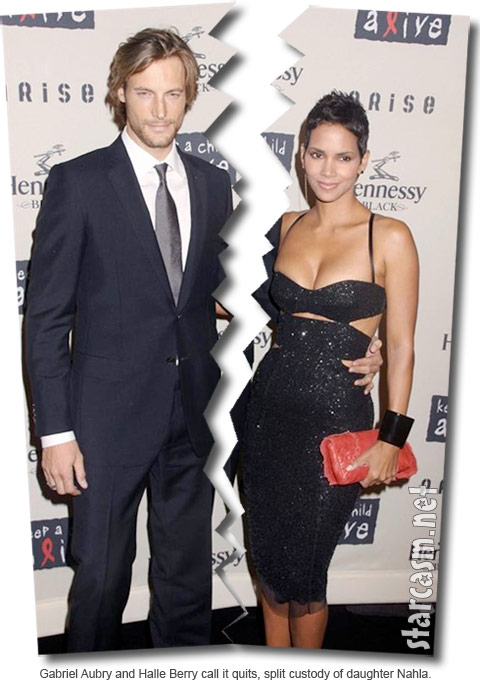 Halle Berry’s hard luck at love continues as she and Gabriel Aubry are calling it quits after being together more than five years.

Radar Online reports that the glamorous duo split a couple months back and have been working together trying to hammer out a 50/50 custody arrangement for their two-year-old daughter Nahla.

According to their source, Canadian model Gabriel is not interested in Halle Berry’s money:

“Halle was terrified that Gabriel would go after her money,” the source says. “But he’s a decent and proud guy and that’s just not his style.

“Gabriel’s main concern was custody of Nahla, he loves that little girl more than anything, and wanted 50/50 joint physical custody of her, which Halle agreed to.

“Financially, Gabriel isn’t in the league of Halle, but he still earns a decent amount from his modeling career, in the region of $700,000 per year, so he’s comfortable and he didn’t want a dime from Halle.

The source also says that it was Gabriel Aubry who instigated the split, claiming the nine-year age difference between Gabriel, 34, and Halle, 43, began to weigh on him:

“Also, Gabriel started noticing other women, and being attracted to others, and he felt it just wasn’t right to stay with Halle in those circumstances.

“Gabriel is a really nice, decent guy and he would never cheat on her, but I suspect that he had become attracted to someone and that he felt he needed to break it off with Halle before anything developed any further.”

The obvious thing to comment on is how beautiful Halle Berry is and how stupid Gabriel Aubry is, but with celebrity couples it’s usually a little more complicated than that. If Gabriel is still a working model, and it sounds as though he is, and with Halle’s movie career and appearances, I can’t imagine how much time they have to spend apart. That being said, it sounds like a real bummer for Halle who has had nothing but bad luck when it comes to love. Her first marriage with former major league baseball player David Justice lasted five years but ended among allegations of domestic abuse, and her second marriage to R&B singer Eric Benet fell apart after four years when she found out about his infidlities.

It sounds as though the break-up is going as amicably as could be hoped for, so maybe it won’t be too devastating of an ordeal for Gabriel, Halle or Nahla.

Are Clint Eastwood and wife Dina on the verge of a split? He surfaces in NYC sans wedding ring