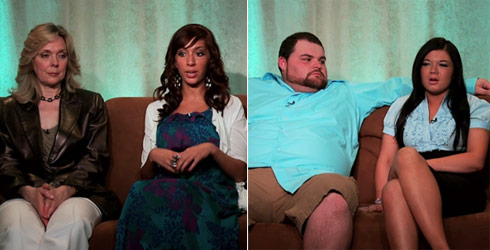 MTV has posted a couple of post-reunion Teen Mom interview clips featuring Farrah Abraham and her mother Debra as well as Amber Portwood and Gary Shirley. I thought I’d share them with you a-la the After Show break downs and provide a summary of what was discussed.

Farrah stated that the hardest thing during the past year for her was to put everything aside and focus on her school work when she didn’t want to. She feels like she should be taking the time to enjoy herself and enjoy her passion but it didn’t allow her the freedom to be with Sophia as much as she wanted. She believes it has paid off but reiterated how hard it was.

Farrah felt a lot of pressure to pass not only for herself but for Sophia as well. As many single mothers (or fathers for that matter) can attest to she had zero free time to “do nothing.” She admits that that statement sounds selfish but she pines for the idea of that freedom which she acknowledges she’ll probably never have again.

Debra added her interesting view as a mother herself as she missed the times when Farrah was 13-14 and they were able to share intimate mother-daughter moments together. They would talk about Farrah’s dreams and aspirations and Debra misses the times that they could share as friends in that way.

When Farrah sees herself on TV it motivates her to want to be better. She thinks that this is the case for all the girls on the show. She addresses her modeling stating that it’s a way to earn fast money to help pay for school. She also takes jobs at restaurants to accomplish the same. Farrah mentioned her desire to open a restaurant and to do her own cooking show.

As I’ve mentioned before, sometimes Farrah’s offish attitude can be difficult to digest but you have to acknowledge the fact that she has a long-term plan for her career and Sophia’s future. Maybe being super-sweet shouldn’t be the biggest part of the equation when you’re in Farrah’s position and are working towards accomplishing your dreams. You’ve got to hunker down and get after it and I believe she’s doing that.

The two then pitched a fascinating new business model as they discussed combining modeling with a cooking show in an intimate apparel themed format! That’s right. You can tell they’ve thought long and hard about a possible dating cooking show and I have to say I wouldn’t mind a Farrah-lingerie-dating-cooking-program. Maybe they could call it Eatrotica! Farrah’s latest shortest-shorts of all time pics are an encouraging sign that this could work.

Amber just launches right into the cold hard facts of the fiery love fest that is Ambs & It’sGaryTime. She said:

“I think if we didn’t have Leah we wouldn’t be together at all.”

Amber adds that for sure she wouldn’t be with Gary because many guys that have done the same things as him to hurt her she’s said goodbye to. Amber kind of talks about Gary like he isn’t there as she goes on about how hard it is to say no to Gary because he’s her baby-daddy. She reveals the possibility that Gary and her could still be an item in the future.

Gary knows that Amber has forgiven him for his mistakes and that they just try to avoid folks who instigate their conflicts. In the end, after all they’ve been through Amber and Gary still see the day when they will be together. They’re nothing if not consistent!

Amber stated that she needed Gary by her side for the battery arrest after she was filmed on the show hitting Gary in front of Leah. During a court appearance for that very offense Gary wanted Amber to know he was there and he could see Amber cry when a judge issued a no-contact order between the two.